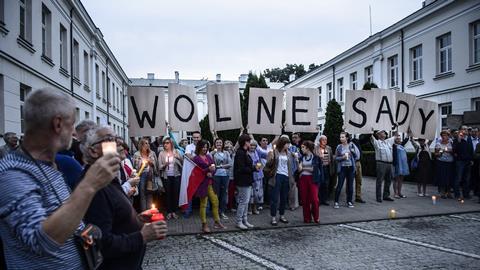 Poland’s president has responded to international concerns over the rule of law in the country by unexpectedly vetoing two proposed laws that would have extended political controls over the judiciary. The measures would have allowed the government to pick supreme court judges and given parliament control of the body the recruits the judiciary.

However. president Andrzej Duda said that he would sign a third measure, which gives the justice minister the power to select the heads of each of the regional courts.

The proposed measures prompted widespread protests in Warsaw a threat of sanctions from the European Commission and messages of concern from legal professionals around the world. Law Society president Joe Egan warned that the consequences of compromising judicial independence ’are likely to be a society that becomes less safe, less stable and less fair’.

Andrew Langdon, chair of the bar, said: ’When the judiciary is beholden to the ruling party of government, there is no longer a separation of powers, and the democratic system of checks and balances, on which the rule of law is based, fails.’

President Duda told a press conference this morning that ’Reform in this shape will not increase the sense of security and justice’.