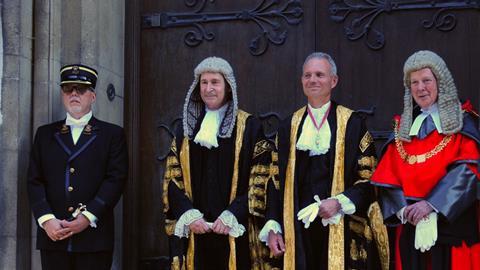 'Strong judiciary' pledge as Lidington sworn in as lord chancellor

David Lidington MP today told the most senior legal figures in England and Wales that he will be 'resolute and unflinching' as lord chancellor in upholding the rule of law and defending the independence of the judiciary.

In an apparent attempt to distance himself from rows surrounding his predecessor Liz Truss, Lidington stressed that the rule of law together with the independence of the judiciary 'form the bedrock of a free and democratic society'.

'They safeguard us against tyranny and dictatorship,' he said. 'They allow us to live in a society where no individual and no government is above the law. A society where everyone can expect equality before the law and the right to a fair trial. A society where executive power is balanced by a strong judiciary that acts without fear or favour, and a scrutinising legislature. Three branches of the state. Each separate but each having mutual respect for the others.'

Lidington said one of his key priorities in his former role as Europe minister was to promote the protection of human rights and uphold the rule of law in countries across Europe, especially in those nations that had seen these traditions and values crushed for most of the 20th century. His overseas perspective served as a 'sharp reminder' of how precious those principles are for protecting people's freedoms, democracy and way of life.

Lidington told judges sitting before him that their intellect, wealth of knowledge, personal integrity and commitment 'ensure we have a judiciary that's fair, free from improper influence and truly independent'.

He added: 'Judges embody the rule of law. You all carry the weight, often the lonely weight, of this most vital duty... For that and for the strength and health this has brought to our country and our society I would like to thank you sincerely.'

Earlier, the lord chief justice, Lord Thomas of Cwmgiedd, told the lord chancellor that his appointment 'comes at a time of real challenge for our justice system'.

Lord Thomas said: 'Each of the three oaths you have taken is of great importance, but it is the third that encapsulates the special constitutional responsibilities for respecting the rule of law, for defending the independence of the judiciary and for the provision of resources which parliament has entrusted to the lord chancellor.

'So important and significant are they that parliament uniquely required the holder of the office to swear a solemn oath to perform, as we have just witnessed. Indeed, it is self-evident that it is vital for the whole of our state that these responsibilities are fully discharged.'

On the day that Brexit negotiations formally began, Law Society president Robert Bourns told Lidington that, through the 9,000 firms that make up the legal profession, 'we provide access to justice through a network of offices across England and Wales and, in the case of our City firms, additional and important global reach.

'We enable legitimate business between individuals, companies and states while acting independently from them recognising our higher duty as a profession to the system of justice and the rule of law.

'In the context of EU negotiations we also expect others to recognise the mutual advantage to our clients, including sovereign funds, maintaining the enforceability of judgments across the EU. At this time of challenge, it is essential that the global reach of our firms, practitioners, and this jurisdiction are not compromised.'

The chairman of the bar, Andrew Langdon QC, reminded the occasion that 'justice is not a "service" that governments can choose to provide or not; it is a separate branch of a democratic government'.

Read our profile of David Lidington here: Europhile in at Petty France.