An unresolved dispute between neighbours over the ownership of a 30-metre triangle of grassland has led to the award of £15,000 in libel damages against a blogger. The case is the latest development in a feud which built up after the arrival of a retired dentist and his accountant partner in the Lake District village of Rosgill.

In Wozniak & Anor v Randall, the High Court - sitting in the County Court in North Shields because of the pandemic - heard that the dispute concerned unregistered land situated between two plots bought by Dr Richard Wozniak and Bridget Kelly in 2015. The land was used on the basis of a right of way by both the new arrivals and their neighbours. In 2017, the court heard, Wozniak's solicitors advised him he had a claim to ownership under the 'ad medium filum' principle. Meanwhile, Chloe Randall, publisher of the 'Concerned of Rosgill' website applied to the Lake District National Park Authority for an order under the Wildlife and Countryside Act 1981 adding a byway open to all traffic along the disputed area.

The dispute escalated with 'many... unhappy incidents' set out in 17 pages in the judgment, including allegations of assault and harassment, a cattle stampede, the installation of gates, rows about parking and allegations of theft of rubbish bags. 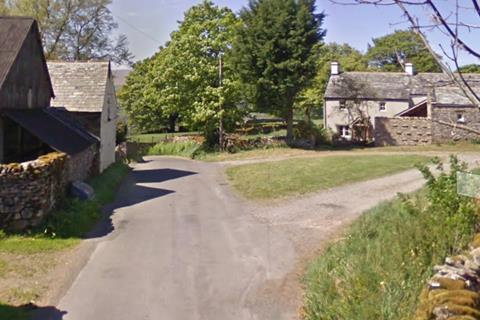 Pictured: The triangle of grassland on the right-hand side of the road

Wozniak and Kelly sued Randall over nine web articles describing them, among other things, as 'offensive individuals', 'townies', 'social pariahs' and 'liars, thieves and bullies'. Randall offered a defence of truth under the Defamation Act 2013.

Giving judgment, Mr Justice Soole observed that both sides 'have been well-matched both in the intensity of their beliefs as to the rightness of their position and in the resources deployed'. Wozniak, he said, 'came across as a man with a very strong sense of his perceived legal rights and of his determination to uphold them against any perceived wrongful challenge. This is coupled with a manner which is relatively inflexible and not readily leavened by humour.'

For her part, Randall has 'intensely-held views as to the perceived historic user rights of local residence'. While describing her as an honest witness, the judge said that 'her passion for Rosgill and its perceived rights and traditions has on occasions overtaken her judgement.'

The judge found six of the complained of articles to be defamatory, including meeting the test under the 2013 act of causing 'serious harm to the reputation of the claimant'.

Noting that 'I do not wish to give any encouragement to any continuation of this litigation', the judge agreed to an order allowing the claimants to restrain any further publication of the libels.