'We need your help with Brexit,' Labour peer tells lawyers

Lawyers are being urged to brief politicians on the government’s bid to end the supremacy of EU law in the UK as the EU Withdrawal Bill makes its way to the House of Lords.

On the first day of the Labour Party conference in Brighton, Baroness Hayter (Dianne Hayter), shadow spokesperson for Exiting the EU, urged the audience at a Society of Labour Lawyers event ‘to please think forward looking. As we begin to see what’s going through the Lords, please keep us briefed and help us do the job we need to do’.

MPs in the House of Commons backed the bill by 326 votes to 290 earlier this month. It is expected to reach the Lords towards the end of the year. 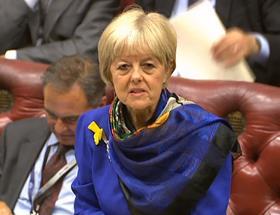 The insurance industry is concerned about long-term contracts in countries such as Spain, Hayter noted. Insolvency practitioners are concerned about freezing assets abroad.

‘This is stuff I did not know about a year ago. We will need more of the help that you are already giving.’

Christina Blacklaws, vice-president of the Law Society, told the event that Chancery Lane is talking to individual solicitors, law firms and other representative bodies about the impact that Brexit will have to their clients and their businesses.

Predicting that Brexit will be the ‘largest, most significant change’ to the UK’s legal framework, Blacklaws said it was crucial that businesses and individuals have time to adjust to the new rights whatever the new relationship with the EU looks like. ‘The government has to ask for transitional arrangements as soon as possible,’ she said.

Areas of concern for Chancery Lane include the scope of delegated powers in the withdrawal bill. Ensuring certainty is also critical.

Blacklaws said: ’Our EU membership has allowed us to create cross-border infrastructure for justice. There are families in cross-border relationships. If they need to go to court they absolutely must know whatever court they end up in, the decision of that court will be respected by other courts,’ she said.

Making a surprise appearance, Lord Bach (Willy Bach) told the event that the main benefit of the Bach Commission’s Right to Justice report, which is being unveiled to the party today, is a ‘serious, hard, grown-up document that experts have produced to deal with a fundamental problem’.

Cross-party agreement about the major principles involved in access to justice and legal aid ‘seem to have collapsed for the time being,’ Bach has observed. The biggest example of that collapse, he said, was part 1 of the Legal Aid, Sentencing and Punishment of Offenders Act 2012.