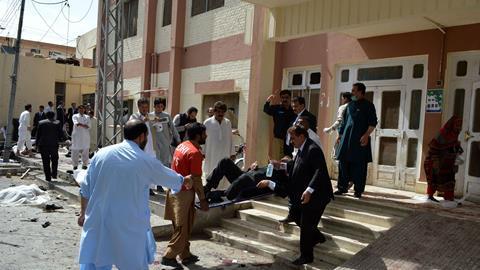 At least 55 lawyers have been killed and dozens more injured in the latest attack on the secular legal profession in Pakistan.

Yesterday’s suicide bombing at Quetta Civil Hospital, where mourners were gathering after the assassination of the president of the local bar association, is emerging as the worst single mass murder of lawyers in recent history.

According to local news reports, the bomber struck at the entrance to the emergency department where scores of people had assembled following the killing of Bilal Anwar Kasi, president of the Balochistan Bar Association, in a gun attack.

It said that a splinter group of the banned group Tehreek-i-Taliban Pakistan had claimed responsibility for both the assassination and the bombing. One survivor said the bomber had been dressed as a lawyer, 'in black suit and black tie'.

Pakistan Supreme Court Bar Association president Ali Zafar said that lawyers across the country will observe three days of mourning during which they will not appear in courts.

'We [lawyers] have been targeted because we always raise our voice for people’s rights and for democracy... Lawyers will not just protest this attack but also prepare a long-term plan of action,' he told reporters.

'We have lost our fellow lawyers, our brothers and innocent people in Quetta. We will continue our boycott of courts tomorrow,' Mehmoodul Hassan, president of the Karachi Bar Association, said.

Law Society president Robert Bourns said: ‘I was shocked and saddened to hear of the death of Bilal Anwar Kasi, former president of the Balochistan Bar Association, and the killing and injury of so many members of the legal profession in Quetta. On behalf of the Law Society of England and Wales, we extend our deepest sympathies to the families, friends and colleagues of these lawyers.

Before yesterday's attack 53 lawyers had already been murdered in Pakistan since 2001. The killing of Rashid Rehman, shot dead after agreeing to defend an academic accused of the capital offence of blasphemy, caused outrage around the world in 2014.