The Attorney General’s office has denied a report that Suella Braverman is poised to ban government lawyers from telling ministers their policies are unlawful. Civil Service lawyers will instead be told to give ‘solutions-based advice’ when challenging a policy’s legality.

The row comes in the wake of the dispute over the government’s policy to deport asylum-seekers to Rwanda and amid growing tension between ministers and the legal profession. But the AG’s office denied a report in the Daily Telegraph that said Braverman is poised to ban government lawyers from dismissing ministers’ policies as unlawful and will order them instead to give a percentage chance that policies may be challenged.

Updated legal risk guidance to be published shortly will state that when ‘a substantial legal challenge to a policy is likely, it does not automatically mean the policy cannot be pursued’, a spokesperson for Braverman said. ‘The focus should be on how government lawyers can work with ministers to problem-solve issues.’ 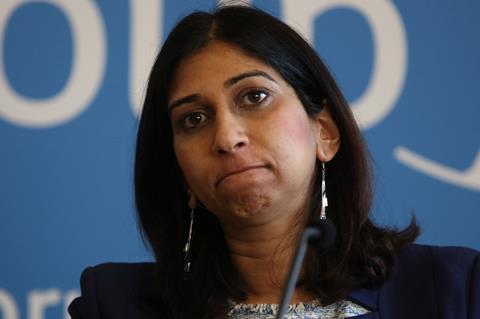 The statement, sent to the Press Association, added: ‘Updates to the Legal Risk Guidance will put more emphasis than previous versions have on the need for Government lawyers to provide solutions-based advice when advising ministers on the risks of their policies…While the guidance does not change the risk assessment underpinning the Government’s decision making, it makes it clearer that when, for example, a substantial legal challenge to a policy is likely, it does not automatically mean the policy cannot be pursued.

‘It places an emphasis on finding solutions that could be put in place to reduce legal risks and their impact, to help ensure government policy is delivered even when novel or complex, but always within the law.’

Lawyers had reacted with fury to the Telegraph’s initial report of a ban.

Dominic Grieve, attorney general between 2010 and 2014, said the alleged ban was an 'idiotic' idea.

Emily Thornberry, Labour’s shadow attorney general, accused the Conservatives of being a 'bunch of third-rate ministers acting like medieval monarchs.

‘They still think that the rules the rest of us have to follow do not apply to them, so much so they have now banned civil servants from even pointing out when their proposals would break the law,’ she said.

Sir Jonathan Jones, who resigned as permanent secretary of the GLD in 2020 following a dispute with Downing Street over its plans to challenge parts of the EU withdrawal agreement, tweeted that a ban would be ‘outrageous, and also very stupid unless [Braverman] also plans to ban *courts* from telling ministers their policies are unlawful’.

Jones later tweeted: ‘There has long been guidance for government lawyers on giving risk-based advice in % terms, weighing chances of challenge, chances of a challenge succeeding, and consequences of that happening (possible remedies, costs etc). It wouldn’t be consistent with that guidance (and I find it difficult to imagine it happening) for a lawyer to say “there’s only a 30% chance of winning if we’re challenged on this policy, so it’s unlawful & we can’t do it”. Ministers are entitled to take a 30% risk.'

He added: ‘And good lawyers will always say, if possible, “and here are ways we can adapt the policy to increase our chances to 50%” or whatever. Again it’s for Ministers to decide if they want to do that. There will or should be a constructive dialogue about it.

'But if the chances of successfully defending a policy are 0% - because it’s obviously unlawful, there’s a fatal legal flaw - of course lawyers must point that out. What else are they to say?’

* On Monday the Telegraph published a correction to its original story, stating: 'An article "Lawyers barred from calling ministers' policies unlawful" (30 July) reported that Suella Braverman, the attorney general, has banned Government lawyers from telling ministers that policies are unlawful. In fact, the guidance to lawyer is that they should advise on the percentage chance of success. We are happy to correct the record.'