Lord chancellor Robert Buckland has criticised a parliamentary committee for not taking evidence from dissenting voices on the European Convention on Human Rights as part of its response to the independent review of the Human Rights Act.

Appearing before the Joint Committee on Human Rights yesterday, Buckland was told that, when preparing its submission to the review, the committee heard no evidence in support of a case for change.

Buckland said: ‘I noted the witnesses and people who gave evidence. I didn’t really see quite a diversity of opinion perhaps I would have expected to see, because there are differing views of the act and differing views frankly about our membership of the [European Convention on Human Rights]. I’m very supportive of and a great believer in our membership of the convention but there are plenty of people who disagree with that, and I was a bit surprised you didn’t take evidence from people who perhaps have a different view from mine about where the balance should lie.’ 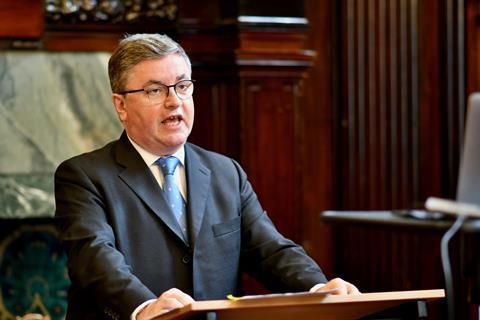 Committee chair Harriet Harman said the committee drew evidence relevant to the terms of reference. Joanna Cherry QC reminded the lord chancellor that he told the committee last October that the EU had nothing to worry about on the UK’s commitment to the convention.

Buckland said: ‘There will be other voices out there who will say the product of the review, whatever it might be, doesn’t go far enough in terms of revising the furniture or changing the structure. It doesn’t actually deal with some of the arguments about whether or not aspects of the convention constrain the ability of legislatures in the UK to legislate as they see fit.

‘There are plenty of arguments, not just noises off but they are legitimate arguments that we might disagree with but which are nonetheless sincerely held that do need to be heard. Whilst I accept the terms of reference we set out aren’t about the fundamental rights themselves, there will be voices saying “Well, hold on, is this structure so broke you can’t fix it other than by withdrawing from the whole framework?” It would have perhaps been interesting for you and others to cross-question people who hold those views.’

Later in the session, Cherry asked Buckland if he knew that the committee took evidence from Professor Graham Gee, ‘one of the prime movers at the Policy Exchange Judicial Power Project, which has been pushing for the changes your government are now contemplating’.

Buckland said: ‘I still think the overall point I made was a valid one. I hear what you say about the particular terms of reference and the way the committee wanted to adhere to the review’s terms of reference… I get bombarded all the time by people who are telling me either I’m too soft on these issues or that I’m dangerous. I’m absolutely well aware of the vast diversity of opinion on these issues. All I’m saying is that as a committee I would have expected you to embrace that as well.’