A company behind 99.5m nuisance calls has been fined a record £400,000 by the Information Commissioner’s Office. Keurboom Communications Ltd, based in Bedfordshire, plagued victims over an 18-month period with enquiries about road traffic accident claims and PPI compensation.

People reported receiving repeat calls, sometimes on the same day and during unsociable hours, from a company that hid its identity.

The ICO received complaints from more than 1,000 people about automated calls and issued seven demands to the company for information during its investigation. 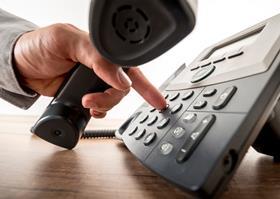 When Keurboom failed to comply with these requests, the company and its director Gregory Rudd were prosecuted and fined last month at Luton Magistrates’ Court.

The court fined the company £1,500 and Rudd £1,000 after they pleaded guilty to failing to comply with an information notice.

The ICO followed that up this week with what is a record fine for a company making nuisance calls to generate claims.

Steve Eckersley, head of enforcement at the ICO, said the company had operated on an ‘unprecedented scale’ and failed to cooperate with the investigation.

‘Keurboom showed scant regard for the rules, causing upset and distress to people unfortunate enough to be on the receiving end of one of its 100m calls,’ he added.

‘These calls have now stopped – as has Keurboom – but our work has not. We’ll continue to track down companies that blight people’s lives with nuisance calls, texts and emails.’

Companies House records show Keurboom entered liquidation last month, but the ICO says it will work with the liquidator and insolvency practitioners to recover the fine.

But the prospects of recovery look slim. A statement of the company’s affairs show it owes £43,435 to unsecured creditors, more than half of which is owed to HM Revenue & Customs. There is likely to be nothing realised to pay these debts off.

The organisation hopes to have its powers enhanced when the government enacts new laws to allow it to fine company directors behind nuisance call firms.

The issue of cold calling is regularly brought up in discussions about personal injury reforms, with claimant representatives calling for a total ban. Solicitors are already banned from making unsolicited calls but the restriction does not apply to claims management companies.