End of the road for landmark assisted dying case

Noel Conway, the terminally ill man who wanted his right to an assisted death to be considered by the Supreme Court, has been refused permission to continue his case.

Following a permissions hearing last Thursday, the Supreme Court today decided that ‘the prospects of Mr Conway succeeding in his claim before this court’ were not sufficient. The judges made the decision ‘not without some reluctance’. 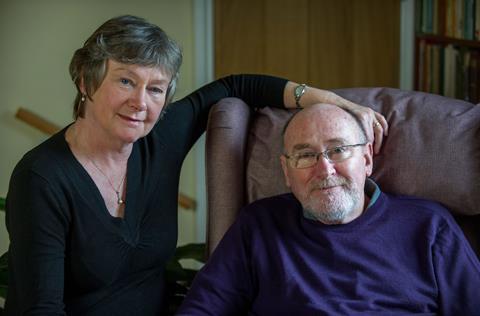 Noel Conway, pictured with his wife: attention turns to Parliament

The court has previously asserted its right to make a declaration of ‘incompatibility’ with human rights law in such cases. It continues to insist on its right to rule, although as currently composed the court is split on the question of incompatibility.

‘These are questions upon which the considered opinions of conscientious judges may legitimately differ. Indeed, they differ amongst the members of this panel,’ the court said.

Campaigners for a change in the law expressed disappointment, while stressing that today’s decision confirms that ‘the ban on assisted suicide is an interference with the right to respect for private life protected by article 8’ of the Human Rights Act, the right to private life.

In a statement issued through campaign group Dignity in Dying, Conway, who has terminal motor neurone disease, said: ‘The courts have… listened to the arguments of doctors who have never met me but think they know best about the end of my life… The only option I currently have is to remove my ventilator and effectively suffocate to death under sedation. To me this is not acceptable, and for many other dying people this choice is not available at all.’ 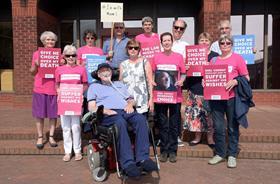 With supporters at Telford County Court in 2017

He added: ‘This is the end of the road for my case, so we must now turn our attention back to Parliament. I hope that MPs will listen to the vast majority of their constituents and give people like me a say over our deaths.’

Conway’s solicitor, Irwin Mitchell partner Yogi Amin, added: ‘The court has accepted that it could make a declaration that the current blanket ban on assisted dying breaches British human rights law. For now the legal issue and the unfairness remain unresolved.’

Sarah Wootton, chief executive of Dignity in Dying, said the decision was ‘a grave injustice’, adding: ‘After opening the door with its judgment in the Nicklinson case, the Supreme Court has declined to follow through, which will come as a bitter blow to those who want control over the manner and timing of their deaths.’