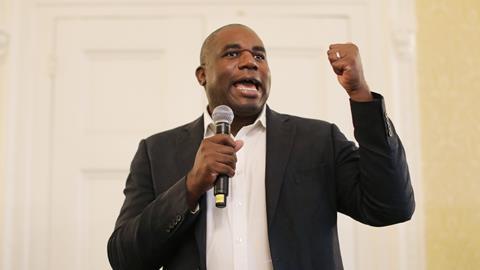 Two prominent Labour figures have renewed their calls for quotas and affirmative action to make the senior judiciary more diverse.

Barrister David Lammy, who conducted a landmark government-commissioned race review of the criminal justice system, and shadow attorney general Shami Chakrabarti were appearing at a Labour Party Conference fringe event on diversity in the law, organised by Justice, a legal thinktank, Society of Labour Lawyers, the Law Society and Bar Council.

Lammy again expressed regret that he recommended targets for the judiciary in his review, and not quotas. He said: 'When in politics you talk about targets, they're just that. Targets are a goal to aim for and often they are missed, but at least the system is working for something. I thought this was a rather tame recommendation. In some sense I now regret making it because I should have recommended quotas. It was not adopted by the government. Progress on diversity is slow.'

Lammy said the issue of judicial diversity was more strongly felt in other Commonwealth jurisdictions, such as Canada, New Zealand and some parts of Australia. 'I found the judiciary in our country keen to hide behind "independence". It has not really grasped the significance of the trust deficit that exists in the ethnic minority population.'

Lammy rejected the suggestion that the lack of diversity is a 'pipeline' issue. He said: 'The table on page 38 of my review confirms it's not a pipeline issue. Ethnic minority lawyers are applying, in quite large numbers. The problem is the drop-off rate is so much higher than their white counterparts. When I asked the Judicial Appointments Commission to explain why this is, surprise surprise they could not explain why this is.' Being told appointments have to be made on merit was 'patronising and crass', Lammy said.

Chakrabarti told the event that the 'meritocracy argument is bogus' and suggested 'time-limited affirmative action to kickstart change'.

The former director of campaign group Liberty said: 'I have seen it work in my own life and career. Just do it for a time-limited period and it becomes natural to have 30%, 40%, 50% of women in wherever it is - the highest court, corporate boards.'

Diversity is also important to preserve the 'legitimacy and sustainability' of the judiciary, she added.

Earlier, Andrea Coomber director of Justice, told the event that eight solicitors have sat on the High Court bench since 1875 - four of them appointed in the last 24 months. There is a 'compelling argument for quotas' if real change does not happen, she said.