The lord chief justice has renewed his criticism of the working conditions endured in crumbling criminal courts across the country.

Speaking at his annual press conference on Friday, the Right Honourable Lord Burnett of Maldon said he wanted to place on record the fact that judges and magistrates have had to operate in environments which are ‘sub-optimal’. 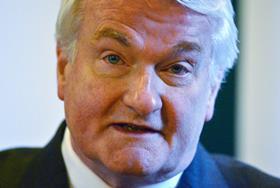 He said these problems are recognised by the Ministry of Justice, but there remains a huge backlog in the maintenance of the court estate which will cost hundreds of millions of pounds to put right.

Lord Burnett said: ‘It really is not reasonable to expect court staff, judges or court users to attend court buildings which are in a terrible state: water coming through the ceilings, for example; jurors having to wear hats and coats in the winter; lifts that do not work; air conditioning that does not work so that courts have to be stopped in the heat of the summer.’

He pointed out that the total cost of HM Courts & Tribunals Service is around £1.6bn, but this is offset in part by the £700m generated in court fees each year.

The lord chief justice, who outlined many of the same issues in his annual report last month, said despite budget constraints it was possible to argue for more money to pay judges in the midst of a recruitment crisis.

Noting the problem that insufficient numbers of judges are being appointed, Lord Burnett said:  ‘In any other environment, if for example your roof is leaking at home, it’s no good saying, “well, I’m not prepared to pay a roofer,” because then your house falls down.’

He rejected the idea that a fully financed justice system was a ‘self-indulgence’ and noted that billions of pounds are generated for the UK economy by international litigants choosing to come to London.

Lord Burnett revealed the judiciary has started to prepare for the consequences of the UK leaving the European Union without a deal on 29 March.

It is anticipated there will be a short-term increase in worked related to Brexit, particularly in the administrative court and in some of the business and property courts, with the potential to recruit extra administrative staff and make greater demands of fee-paid judges.