A group representing Liberal Democrat lawyers has weighed in to the campaign to thwart Brexit, which it today branded a ‘coup d’etat’ in an email to members. The lawyers’ position will increase internal party pressure on leader Tim Farron to harden his anti-Brexit line.

The group, now rebranded ‘Justice, Democracy and Europe’, has taken a more radical line than the party’s leadership. While Lib Dem parliamentarians have said they will vote against any motion to trigger article 50, to date Farron has not questioned the legitimacy of the referendum result.

Farron instead proposes a second referendum on any ‘deal’, and has called for membership of the single market to be retained. 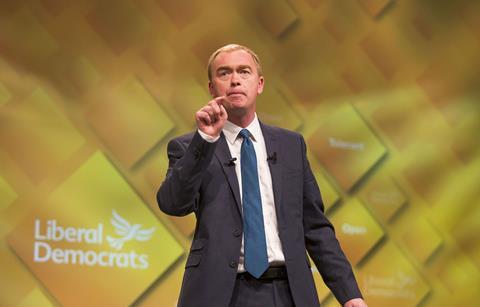 In the email to members, headed ‘Brexit – no way!’, the group’s chair Graham Colley, a solicitor in Kent, says of the referendum result: ‘I wake up wondering how a such a small group could have, in effect, exercised a “Brexit coup d’etat”.

‘We are now being led by a prime minister, who was unelected and, is committing us to leave the single market, is acting against a 2015 Conservative manifesto commitment, as well as her own expressed views prior to the referendum.’

Colley said he ‘will do everything to ensure that the national interest prevails… we believe Brexit will lead us into a narrow, insular and poorer future’. All the group’s events and activities listed for 2017 relate to Brexit.

The Liberal Democrats’ 2010 general election manifesto ‘committed to an in/out referendum the next time a British government signs up for fundamental change in the relationship between the UK and the EU’.