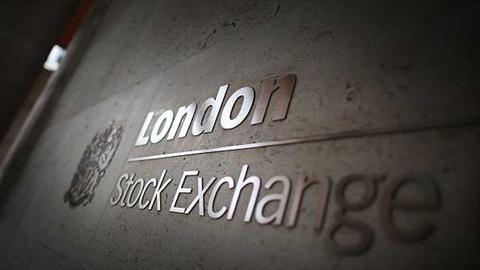 Listed legal services businesses have faced additional pressures in the last 13 months: the twists and turns of the pandemic have been mapped by the ups and downs of their share prices. But on the whole, their solid market performance could well revive interest in legal sector IPOs.

Since Gateley made legal history in 2015 by becoming the first UK law firm to float on the London Stock Exchange, firm owners have been watching the performance of listed practices with interest. However, it is only in the past 12 months that the ability of listed firms to withstand a concerted market downturn has really been put to the test.

Almost all the law firms listed in London took a hit in the early stages of the pandemic. At DWF, which floated on the main market in 2019, shares were riding at a record high in February 2020 before losing over a third of their value in a month. Shares continued to fall over the next two months, reaching a record low of 53p in early July. Since then, DWF Group shares have begun to climb but remain well below their 2020 peak, at 87.5p at the time of writing.

The recovery followed drastic action: DWF replaced chief executive Andrew Leaitherland in May and announced job cuts and the closure or scaling back of operations in Cologne, Dubai, Singapore and Brussels.

Shares in Anexo, a credit hire and legal services provider, followed a similar path to DWF, plunging to 103.5p at the end of March 2020 from 185p the month before. While shares recovered slightly in the subsequent lockdowns, they remain well below their peak in 2019 and early 2020.

However, most listed law firms have rallied strongly in the wake of the first lockdown. Shares in Knights, Gateley and Keystone Law were all significantly higher on 22 March 2021 than on 23 March 2020, when Boris Johnson announced the first UK lockdown. While there have been some peaks and troughs along the way, legal businesses have mainly proved resilient.

As a result, interest in new flotations appears to be building. According to national media reports, Irwin Mitchell has revived flotation plans dating back years, with hopes of securing a £500m valuation. Meanwhile, in 2019, Mishcon de Reya was believed to have appointed bankers to advise on going public.

Analysts say the legal market was viewed as a risk by jittery investors as lockdown kicked in and the sector was thrust into uncharted waters outside the traditional office environment. But within a short time, the resilience and adaptability of law firms started to shine through, which prompted a quicker recovery than in other professional services.

Andrew Simms, head of research at investment bank Arden Partners, said: ‘As a relatively new listed sector, legal firms underperformed the broader stockmarket during the initial stages of the pandemic and Covid lockdown, as the diversification and counter-cyclical parts of the business models had not previously been tested, while the recoverability of key receivables and WIP [work in progress] balances was unclear to investors.

‘Through the second half of 2020, the firms had demonstrated good operational and financial management, seamless remote working highlighting the benefits of investing in technology, remaining strongly positioned and well capitalised to continue to execute on strategy. With strong organic growth returning, the share prices of the legal firms have also recovered and outperformed the stockmarket over the past six months, providing good validation of the investment case for this sector.’

Will more firms be tempted to go public? Tony Williams, principal of legal consultancy Jomati and former managing partner at Clifford Chance, said: ‘There have been good prices that have been achieved and obviously that will tempt others. The way that the market responded last year shows that it’s not all a bed of roses, however. And I think the models that have tended to list have tended to have a very small group of shareholders – DWF is the exception to that.’

There are still very few law firms listed on the stock exchange, so it may be that the resurgence is down more to the firms themselves than the sector’s strength. But investors will know there is not necessarily anything to fear from backing a listed legal practice and the pandemic is more likely to have encouraged rather than deterred firms from considering an IPO. 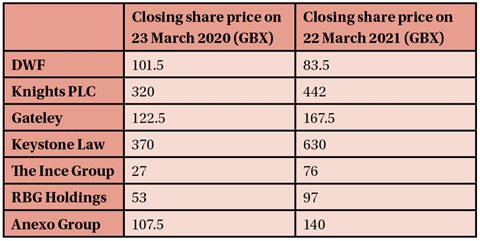