Sir Geoffrey Vos was officially appointed as Master of the Rolls in a near empty courtroom yesterday, during a Covid secure swearing-in ceremony.

In his welcoming speech, the lord chief justice said he is ‘looking forward enormously’ to working with Sir Geoffrey and praised his ‘energy, vision and determination’.

However, Lord Burnett of Maldon said he was disappointed more people could not physically attend the ceremony. ‘In more normal times I would be accompanied on the bench by the heads of each division of the High Court, the president of the Supreme Court and the Lord Chancellor. 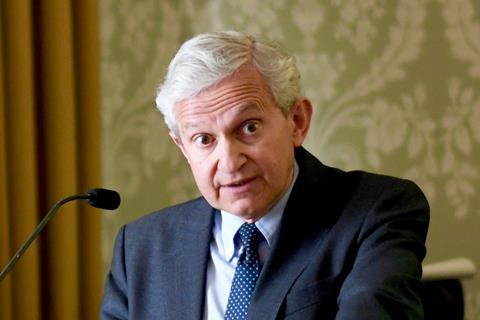 ‘But today Sir Geoffrey and I cut lonely, socially distanced figures in this vast courtroom with almost all others attending remotely,’ he said.

Sir Geoffrey succeeds Sir Terence Etherton as president of the civil division of the Court of Appeal and head of civil justice. He previously served as chancellor of the High Court and was chair of the Bar Council in 2007.

At last year’s annual bar conference, Sir Geoffrey vowed to ‘radically rethink’ civil justice, saying the UK legal system ‘needs to be ambitious in terms of digitalisation if it is to retain and enhance its status’.

At the swearing-in ceremony, Lord Burnett said Sir Geoffrey has been ‘at the forefront of promoting London as the premier international dispute resolution centre and in encouraging the use of technology in the administration of justice and resolution of disputes’.

David Greene, president of the Law Society, added that Sir Geoffrey is an ‘outstanding lawyer, a legal disruptor and the premier ambassador of the jurisdiction’.

‘I fear you have a heavy burden but a burden you will easily carry to ensure the law and legal services match the ever changing technology and that post Brexit the jurisdiction remains at the heart of the world economy,’ Greene said at the swearing-in ceremony.

Following his valedictory speech last month, Sir Terence Etherton issued a statement saying he has a genetic blood disorder which requires, and is now receiving, treatment. 'I am grateful for and touched by the many good wishes received following my valedictory speech from which it must have been apparent I am unwell. I was determined to end my 20 years as a judge with a dignified full stop. I hope I achieved that,' he said.