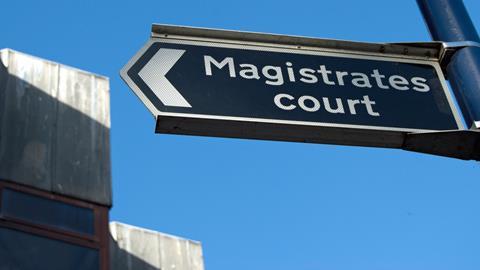 The criminal caseload in the magistrates' court is now almost back to pre-pandemic levels following a 20% drop from July 2020 to May this year, the new chief executive of HM Courts & Tribunals Services has reported. In an update to criminal justice stakeholders, Nick Goodwin, who took up his post in March also reports that the outstanding caseload in the Crown court has reduced from a high of around 60,600 cases in June 2021 to around 58,300 cases at the end of May 2022.

Available Crown court space is also comparable to pre-pandemic levels, Goodwin states. ‘Super courtrooms’ have opened in Manchester and Loughborough allowing an extra 500 cases to be heard a year.

'We cannot ignore that there is still a long way to go,' Goodwin writes, noting that ‘obvious immediate challenges’ include the criminal bar’s protest. 'Court staff continue to work hard to manage the impacts of this, and listing officers are working closely with resident judges to ensure as many cases as possible can be heard.'

On the £1.3bn courts reform programme, Goodwin reveals that the new Common Platform IT system, 'replacing whole networks of outdated systems' will be installed at 29 more criminal court sites by the end of the month. 'System performance, stablity and speed have significantly improved'.

The new combined court centre in Fleet Street, London, is expected to be functioning in 2026.