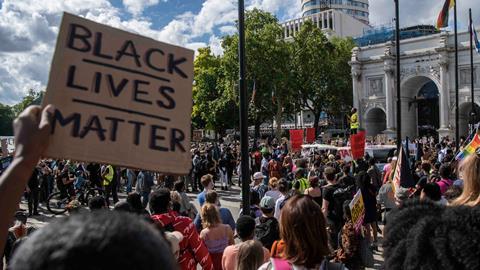 Police could be sued over Black Lives Matter protests

The police could be sued over tactics deployed during protests supporting the Black Lives Matters movement, the Gazette has learned.

The Black Protest Legal Support group was set up to provide free advice and representation to activists and protesters. Committee member Danielle Manson, a barrister at Garden Court Chambers, told a Public Law Project conference this week to ‘watch this space’ over the possibility of legal action.

Demonstrations and protests have been held across the globe, including in central London and other UK cities, following the death of George Floyd in the US.

Manson told the conference that members of the support group attended the marches as ‘legal observers… and act as watchdogs over the use of force being exercised by the police’. She spoke about two tactics she saw herself in central London - kettling (where police form large cordons to control large crowds) and facial recognition technology.

Manson said kettles were themselves not controversial. ‘But what we did find controversial and questionable was what the police were requiring for people permitted to leave the kettle. Examples I saw myself were police officers asking for personal details of those in the kettle [such as] name, date of birth and address.’

As the police had started to release protesters from the kettle, Manson said ‘they have come to the conclusion that the breach of the peace is no longer imminent’.

‘The second issue I experienced was the use of facial recognition software. It was used in a similar way, in the way individuals were being asked for personal details as a pre-requisite of being able to leave a kettle.’

Due to the Covid_19 pandemic, many protesters were wearing face coverings. Manson said police officers ‘were requiring individuals to remove those coverings so the facial recognition technology could be utilised’.

As well as putting people at risk from a public health perspective, ‘why are police using that technology as a pre-requisite for people being able to leave the kettle?’ she asked.

‘My observations from being on the ground and at the protests, and combining everything I know about protest law – watch this space as to what legal challenges will happen as a result of that.’