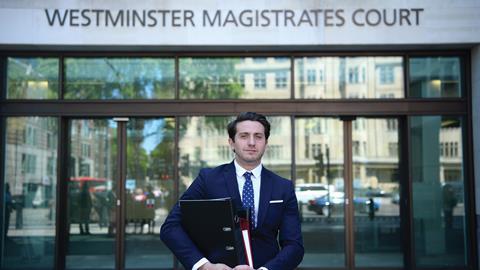 Private prosecutions to cause surge in professional negligence work

Professional negligence lawyers should brace themselves for a flurry of work arising from a surge in the number of poorly advised private prosecutions, experts in the field have predicted.

Colin Witcher and Anthony Eskander, of Church Court Chambers, told the Professional Negligence Lawyers Association conference that they expected an increase in actions against solicitors where their conduct caused the collapse of a prosecution and/or adverse costs orders.

The barristers, who represented campaigner Marcus Ball (pictured above) in his private prosecution of Boris Johnson earlier this year, said there had been a ‘marked increase’ in similar proceedings brought by individuals. But with the increase has come more law firms claiming to be specialists in the field and making unrealistic promises of success.

Witcher said: ‘In [our] chambers it has been about a 3,000% increase in enquiries from serious causes wanting advice in prosecutions. The risk of that is that people are running before they are walking, which is where professional negligence lawyers come in.’

He added that the courts have been quick to award costs against losing parties ‘no questions asked’ and that this may have been meant as a warning to lawyers not to bring unmeritorious cases. ‘There will be victims [who are] very unhappy a private prosecution goes wrong and they are lumbered with costs almost always in six figures.’

Witcher and Eskander attribute the increase in private prosecutions to a number of factors, including a lack of confidence in the Crown Prosecution Service, the victim wishing to retain control, and active involvement and wider public awareness of the right to bring private prosecutions.

Earlier this year, all members of the Private Prosecutors Association agreed to abide by a published code that aimed to improve the standard of prosecutions and set a benchmark for best practice.