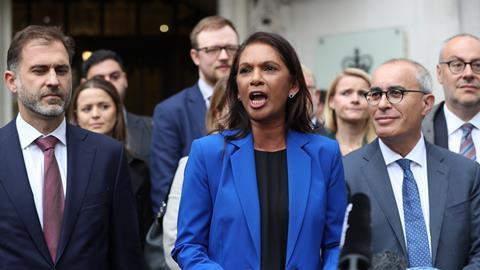 Boris Johnson’s proroguing of parliament was unlawful, the Supreme Court has ruled in a victory for campaigner Gina Miller and her lawyers Mishcon de Reya.

Eleven Supreme Court justices unanimously ruled this morning that parliament has not been prorogued, with Lady Hale stating the decision to advise the Queen was unlawful as it had the effect to ‘frustrate and prevent’ the ability of parliament to carry out its functions.

Hale said that ‘no justification’ had been put forward for the government taking the action it did.

Andrew Hood, Fieldfisher partner and former general counsel to David Cameron, said: ‘Parliament has already formally legislated to try to prevent a no-deal Brexit on 31 October, by passing the European Union (Withdrawal) (No. 2) Act 2019 but the Supreme Court’s decision against the government could still affect Brexit.

‘Whether the government tries again and whether MPs agree to a recess for party conferences will depend on how much time is left for parliament to scrutinise the government’s policy on Brexit.

'Today’s decision also means that important unfinished Brexit-related (and other) legislation – covering areas such as immigration, fisheries and agriculture - that fell at the time of prorogation will continue their passage through parliament.’

Hogan Lovells partner Charles Brasted said: 'The Supreme Court agreed with the Scottish Court, that the consequence is that the prorogation is of no effect – as a matter of law, it is now as if it had never happened. It is for the Speaker and the Lord Speaker now to make appropriate arrangements for parliamentary business to resume, and it will do so as if without interruption.

'Accordingly, those bills before Parliament before the prorogation are reinstated and can continue their parliamentary passage. It also means that there will be no Queen's Speech unless and until the Prime Minister is able lawfully to prorogue.'

President of the Law Society Simon Davis said: ‘Whatever you think of the decision, today’s Supreme Court ruling is a vital expression of the checks and balances that exist in our democracy.

‘Our court system and our judges are there so the law laid down by parliament can be interpreted. In a mature democracy it is crucial that the independence of this process is maintained.

‘A judge’s ruling is an expression of the law – not of their personal opinion. It would be disingenuous to conflate the two.’

The text of the judgment can be read here.