Scotland’s criminal defence solicitors are boycotting custody courts today in protest over what they say has been the government’s failure to properly distribute a Covid-19 resilience fund. 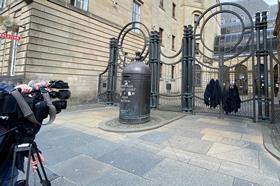 'Gowns Down' at Edinburgh Sheriff Court

The Scottish Government assigned £9m to a resilience fund but the SSBA said only £2.3m had been distributed. Of the 287 firms that applied for funding, less than a third were granted an award.

A statement calling for the government to urgently distribute the resilience fund was signed by over a dozen bar associations including Edinburgh and Glasgow. They also said that £1m was promised in December to support legal aid firms to take on trainees but 'not a single penny' had been distributed from the traineeship fund.

Last-minute talks were held between the SSBA and the Scottish Government yesterday. However, the SSBA said ‘no clear assurances were given’ so the boycott would go ahead as planned. ‘Vague promises will not cut it at this stage, and unless this issue is resolved further action cannot and will not be ruled out,’ the association added.

Practitioners have posted photos of gowns hanging off court railings and on empty chairs in court with the hashtag 'Gowns Down'.

Law Society of Scotland president Amanda Millar said legal aid solicitors have felt disrespected and ignored by the Scottish Government for years. ‘When ministers announced a new £9m legal aid support package last December in response to Covid, it was hoped this marked a change in attitude and a more positive approach. Yet five months on, most of the promised money remains in a Scottish Government bank account as legal aid solicitors sit wondering if their firms will survive this week.

‘We warned government that its harsh and rigid criteria for support grants would mean money would not reach those who desperately need it. Regrettably, this is exactly what has happened. It is why so many solicitors now feel they have no choice but to act to make the government change course and amend the way firms can get financial support. Ministers need to listen and act fast.’

A Scottish Government spokesperson said: 'As well as delivering the first stage of an uplift to legal aid fees of more than 10% over the next two years, the Scottish Government launched a resilience fund to support legal aid solicitors. We received 288 applications – representing fewer than half of the potentially eligible active firms - and have offered awards totalling circa £2.3m.

'We are fully committed to providing support to the profession and are working as a matter of urgency to explore options for distributing all unallocated funds from the £9m budget set aside for the resilience fund. The justice secretary held talks with the Law Society last week, where he confirmed he is committed to ensuring more funds are made available. He is happy to engage with criminal bar associations and discussions with the profession are ongoing.'