As the criminal bar’s strike over legal aid funding continues, solicitors could escalate their own action as early as next week.

Many solicitors are already boycotting poorly paid work such as burglary, harassment, stalking and assault on emergency workers. A survey of members of the London Criminal Courts Solicitors Association (LCCSA) on if and how to escalate action closes at 5.30pm today.

Options include a refusal to cover all future police station or magistrates’ court duty slots, or spending every Friday in training, which would mean being unable to attend court. 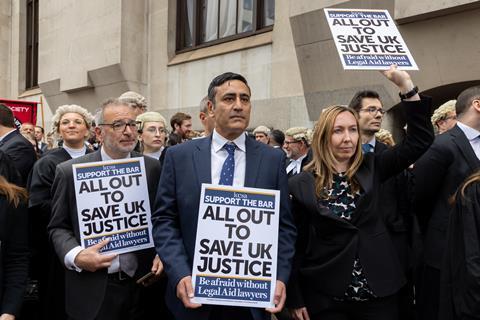 Should action escalate, it could begin as early as next week.

Puri told the Gazette: ‘It is really important that members respond to the survey so that we have an idea of how we want to move forward. This is our last chance. If we do nothing new, we’re left in the powerless state that we’re in and nothing will improve – firms will carry on closing, employers will not be able to recruit and people will leave to go to the CPS.’

Last week the Ministry of Justice announced it would fast-track legislation so practitioners see a pay rise by the end of the year. Puri said the ministry’s announcement said nothing the department had not already and would do nothing to secure the future of the criminal defence sector.