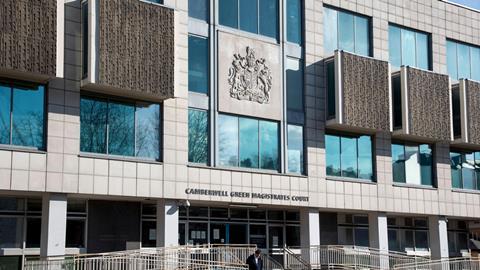 The Ministry of Justice has earmarked two more London courts for closure, just months after announcing that 86 courts around England and Wales would be shut.

A consultation opened today, 15 September, proposes to close Camberwell Green (pictured) and Hammersmith magistrates’ courts and have their work ‘absorbed by existing courts’.

But the timing of the decision, which coincided with the deadline for applications for new legal aid contracts, was slammed as a ‘travesty’ by the London Criminal Courts Solicitors’ Association (LCCSA), which said London had seen a dramatic reduction in local justice facilities.

‘For some time there have been rumours that Camberwell court might follow suit, but to launch a consultation immediately after the deadline for new legal aid contract tenders closed is a travesty for those firms trying to plan and predict areas and volume of work,’ LCCSA president Greg Foxsmith told the Gazette.

‘The proposed closure of Hammersmith, opened just 20 years ago, is even more baffling.

‘Defendants, lawyers and witnesses will face longer journey times and greater expense to secure justice. And the strained resources of the court service will be further depleted by job losses for the admin staff. It is that announcement that suggests this “consultation” is merely a masquerade, with the ministry capitulating to the Treasury.’

In February, the Gazette reported that 86 courts would be closing as part of an MoJ review of its estate.

For defendants under 18, the MoJ recommends using either Croydon, Wimbledon, or Bromley magistrates’ courts.

For Hammersmith, the MoJ said over-18s could attend either Westminster or Hendon magistrates’ courts while under-18s should attend the magistrates' courts at Highbury Corner or Wimbledon.

The consultation runs to 27 October.

The Law Society said that shutting two more courts in London on top of the 10 already closing across the capital this year might leave people unable to access justice.

Society president Robert Bourns said: 'We are concerned the government is proposing to shut down further courts before assessing the impact on access to justice of the ongoing closure of 86 courts across England and Wales, many of them in London. The Law Society will seek the views of solicitors working for clients in Camberwell and Hammersmith to inform our response to the government’s consultation on these new proposed closures.

'We support government efforts to improve court efficiency through better use of technology. However, the modernisation process will take time. It cannot fill the immediate gap created by each court closure, each of which impose greater pressures on those courts, personnel and judiciary who remain.

'No matter who you are, no matter where you live, everyone in England and Wales must be able to access legal advice and the justice system.'