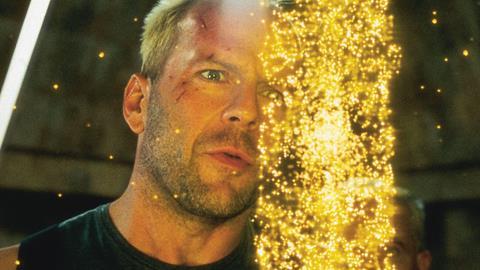 ‘Back in my day this were all fields, lad’

Obiter suspects this week’s entry marks the first time that Lord Justice Fulford has been compared to Bruce Willis (pictured). If we are wrong, we apologise.

In the 1997 sci-fi movie The Fifth Element, set in the 23rd century, Willis – complete with his flying taxi – is forced to save an unrecognisable world from destruction, battling robots and spacecraft.

Fulford’s task is similar, and no less tricky. He, along with the government and other judges, has to ensure the court system can cope with rapidly advancing changes in technology.

Speaking at the bar conference last weekend you could be forgiven for thinking the senior presiding judge believes we are already in the 23rd century and that our courts are on the brink of extinction.

‘I veer between amazement at technology and fear of cyber-dystopia,’ he told delegates with the hint of a tremble in his voice.

He predicted that work across all courts and tribunals could be transferred to the ‘cloud’ within the next four years and said technophobic judges who once ‘vowed never to touch a keyboard’ are ‘already’ working completely online.

‘Many of us will gaze out across green fields, listen to the skylarks and wish for a less technologically based age. I certainly do, for I drown daily in a waterfall of emails,’ he added.

‘Such thoughts are, sadly, wholly unrealistic – an unobtainable nostalgia.’