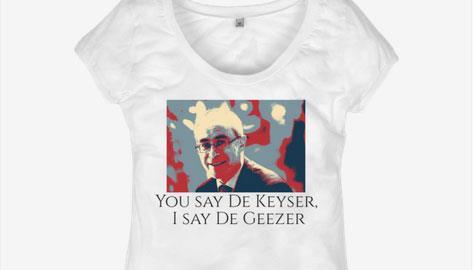 The moment when Lord Pannick QC and Lady Hale became the Supreme Court’s answer to Fred Astaire and Ginger Rogers isn't the most important from the past four days but it could be one of the most amusing.

Unless you have failed to check any social media over the last 24 hours you will have seen that, after sparring in the article 50 hearing over the pronunciation of the De Keyser case with the judge, Pannick paid homage to the ‘You say tomayto, I say tomahto’ line from Let's Call the Whole Thing Off by telling Hale: ‘You say De Keyser and I say De Kaiser.’

The exchange led to the inevitable flow of tweets and Facebook posts poking fun at the incident.

But thanks to barrister Sean Jones and Richard Moorhead, a law professor at UCL, a lasting memory has been created in the form of ‘De Keyser, De Geezer’ T-shirts.

The shirts, which say ‘You say De Keyser, I say De Geezer’, are available on the Billable Hour website for £19.

All the money raised will be in aid of Save the Children. At the time of writing 73 had been sold.

Moorhead told the Gazette: ‘It was partly me, a few of us were just being daft on Twitter and it snowballed. DP [Pannick] said yes instantly.’

Others were slightly more cheeky though; Twitter user Esther Pilger wrote: ‘Imagining Lady Hale chilling at the weekend in this and Christmas PJs’.