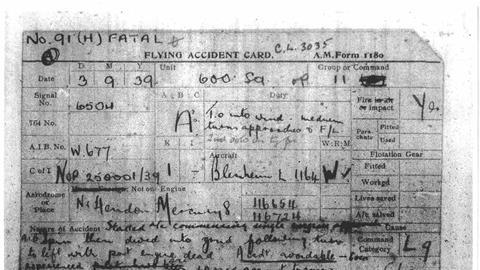 Eighty years on, a poignant reminder

On a more sombre note, the Gazette marked last month’s 80th anniversary of the outbreak of the second world war by noting that the first British serviceman to be killed on active service was a solicitor. Clifford-Turner partner John Noel Laughton Isaac died when the Bristol Blenheim he was piloting stalled and crashed at Hendon, north London, barely an hour after hostilities commenced.

The RAF Museum has kindly sent us the official report card (Air Ministry form 1180) of the accident, which, for obvious reasons, was hushed up at the time. Its handwritten brevity underlines what a different world was the Britain of 80 years ago. The narrative of what happened – ‘dived into ground following turn to left with port engine “dead”’ – takes up fewer than 40 words. Poignantly, two of them, underlined, are ‘accident avoidable’.