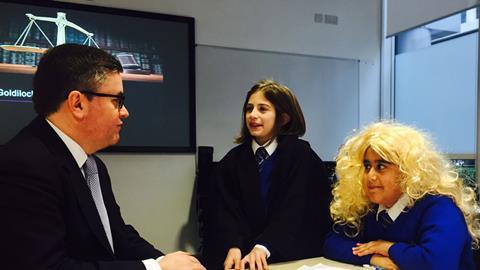 Goldilocks and the solicitor-general

If it weren’t for the school pupil wearing a rather voluminous blonde wig, Obiter would have thought the Attorney General’s Office had lost the plot when it posted the following tweet this morning:

. @RobertBuckland discusses whether Goldilocks was guilty of theft and breaking and entering with the judge and defendant #ple #probono pic.twitter.com/s8WNgMGuXA

It turns out solicitor-general Robert Buckland QC was in Yorkshire today, teaching school children about the law and their basic civil and criminal rights.

Year-five pupils from Adel Primary School took part in a mock trial of Goldilocks v The Three Bears at BPP University Law School in Leeds, where they decided if the porridge-guzzling fairytale character was guilty of breaking and entering, and causing criminal damage and stealing the bears’ food.

The trial was part of the law school’s ‘Streetlaw’ session, which explains the criminal trial process through the well-known tale to help children learn about the legal system, courts and the people who appear in them in an interesting and enjoyable way.

But legal eagles were quick to spot a problem with the tweet: it turns out there’s no offence of breaking and entering in this country.