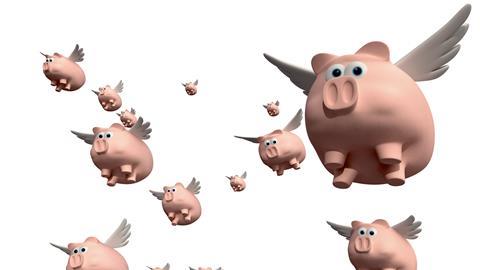 As inflammatory statements go, the lord chancellor’s claim that there is ‘a lot of support’ for extended court hours was at the more incendiary end. Voices from across the profession reacted with fury, citing caring responsibilities, diversity concerns, low pay and impossible workloads.

The Criminal Bar Association delivered a stirring address – think Henry V before the Battle of Agincourt – assuring members ‘you are and will be the masters of your destiny’.

It was the Bar Council’s reaction, however, that grabbed people’s attention. Taking to Twitter, the representative body responded with the words ‘Overwhelming support?’ under a photograph of a piglet sporting enormous, feathery wings. It was one of the organisation’s most successful posts, receiving over 500 likes.

Warming to her theme, Bar Council chair Amanda Pinto QC then asked barristers: ‘Is this what it’s like to be dumped on Twitter rather than face to face? … The MoJ asked us to participate in groups supposedly to consider the viability of extending sitting days; but it is already telling the media that this is a fait accompli.’

Obiter is curious to see what’s next for the Bar Council’s digital persona. Will it be ghosted by HMCTS? Catfished by the Inns of Court? O, brave new world!