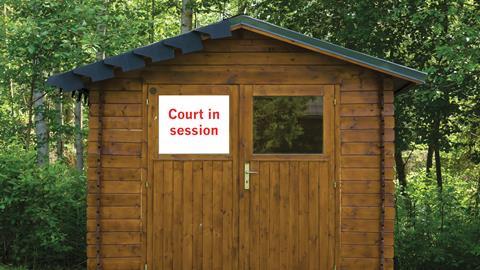 Justice by the shedload

Alternative court venues are very much flavour of the month. But could we see justice being served in a shed?

Raising the government’s plans to close ‘small, largely redundant courts’ during questions at an all-party parliamentary group last week, barrister Lord Carlile of Berriew recalled magistrates’ courts being heard in village halls, and county courts in working men’s clubs. ‘The quality of justice was no lower in those settings,’ Carlile said.

This prompted justice minister Oliver Heald, who was called to the bar in 1977, to take a trip down memory lane, telling the meeting he remembered appearing in ‘tiny courtrooms’ and premises ‘which just became the court of the day’.

Heald said it was perfectly possible to have ‘pop up’ courts. ‘Sometimes, for a particular kind of case where you need an enormous amount of space, you might take a commercial industrial shed,’ he added. ‘There’s no reason to [think] why courts cannot be set up in all sorts of places.’

It all rather reminded Obiter of Monty Python’s Four Yorkshiremen sketch: ‘Commercial shed? Luxury! We had to make do wi’ concrete bus shelter…’.

Can any readers do better? Obiter has a small prize for the best tale of justice being served in an unlikely setting. Obiter@lawsociety.org.uk.