Zoe Pettifog parked her briefcase on a handy cloud and looked around: ‘I wasn’t expecting it to look so much like Pwllheli,’ she observed.

‘Never mind how it looks, what’s with the racket?’ Baz, her assistant, grumbled. ‘Everyone here’s like “FEED ME NO-OW AND EVER-MORE…”.’

‘Show a little cultural sensitivity, Baz, or it’ll be another diversity course for you. Aha, this looks like him now.’ Sure enough, a white-haired moustachioed figure strode across the cloudscape. 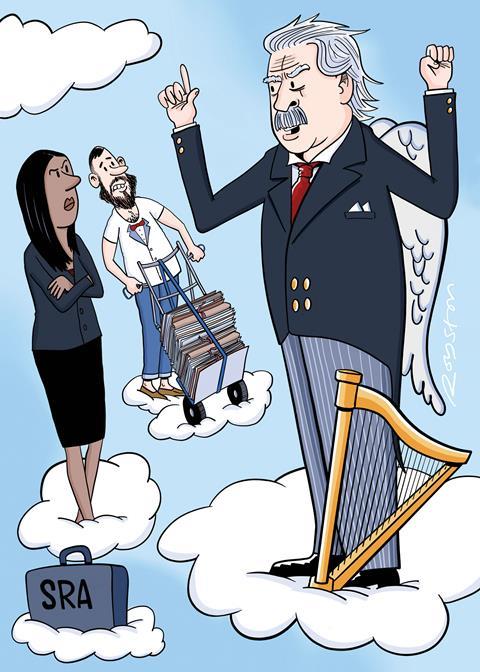 ‘Call me Lloyd George, Girlie, and speak English if it is your preference – I don’t get much practice up here, save when Winston calls by. Now, what can I do for you two?’

Girlie? Zoe winced, but recalled her lecture on cultural sensitivity. ‘Thank you. I apologise for interrupting the Eisteddfod, but we are here on business: we’re PIFT.’

‘That’s an achievement, in Caernarvonshire on a Sunday.’

‘No Sir, I mean my colleague and I represent the Posthumous Inquiry Field Team of the Solicitors Regulation Authority – ’

‘Regulation Authority? Never heard of such a thing in my life – or, indeed, after life.’

‘Since your day there have been regulatory changes affecting the profession in England and Wales,’ Zoe explained, ‘notably the Legal Services Act passed by the Labour government.’

‘Actually this was not Mr Attlee but a successor whom you may not encounter up here. The act established the Legal Services Consumer Panel which has highlighted the fact that complaints against solicitors are not being investigated due to the trivial detail of the alleged malefactors being deceased. PIFT is the result.’

‘And what might your inquiries reveal about the first solicitor to rise to the rank of prime minister, on 7 December 1916? Who was raised in a shoemaker’s cottage, left the village school at 15, studied law to fight for the poor and oppressed – both as a solicitor and member of parliament; campaigned against cruelties in South Africa and Ireland, introduced health insurance, reformed the Lords, won the Great War, granted votes for women…’

‘Achievements all on the record, Sir, but nonetheless certain allegations about your practice as a solicitor in the 1880s have been brought to our attention.’

Baz stepped forward with the charge sheet. ‘First, numerous failings to record income from clients in contravention of principle 8 –’

‘Clients had no money - couldn't bill them!’

‘– insolence before the bench, contravening principle 6 –’

‘Self-serving imbeciles deserved what they got!’

‘– and most seriously that, in the county of Caernafon in 1888, you did, in breach of principle 1, incite clients to commit criminal damage to a churchyard gate to the value one pound and 10 shillings and thereafter conduct an unauthorised burial…’

‘The Llanfrothen Burial Case – my proudest moment in law! Did I not triumph over a Church of England rector’s bigoted attempt to intern my late client in a spot bleak and sinister, on the excuse of his non-conformist beliefs? Was this not the making of my career?’

‘Nonetheless, there does seem to be a breach of your duty always to uphold the law and the proper administration of justice. You are therefore summoned to appear before a Celestial Sitting of the Solicitors Disciplinary Tribunal.’

‘You what?’ Zoe inquired.

‘Of course! An Eternal Eisteddfod is all very well, but I miss the cut and thrust. Bring it on – if you can find counsel up to the challenge! I shall compose my defence forthwith, citing precedent from Llywelyn ap Iorwerth onwards! I call as character witnesses Churchill, Gandhi… and kindly inform the listings clerk that my opening speech will require a millennium!’

Baz groaned: ‘Man, this is going to be purgatory…’

‘Of course it is, Boyo! Where did you expect to end up?’