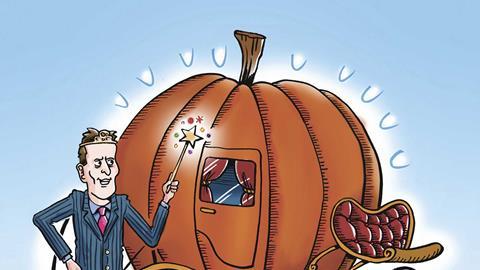 BUTTONS: We bring you a tale from days of yore. It’s magic, it’s tragic, with not too much law. But hush! Here’s poor Cinders sweating over CPR Part 44.

CINDERS: Oh Buttons, what a life. Ever since old Mr Kontract went into partnership with Mistress Flakey my days have been one long grind. Every penny we make is going straight to my dreadful stepsisters. And it’s not as if they’re even qualified!

BUTTONS: True, when it comes to legal expertise, they’re about as much use as Helen Grant on sports quiz night. Oops – here they come now.

UGLY STEPSISTERS [singing]:  ‘Boys and girls come out to play, and if you’re in an RTA, we’ll help you make a pile today. But please don’t tell the SRA!’

MYSTERY VOICE: Don’t worry, children, if this script fails to uphold standards of truth and decency, I’ll whip my Royal Charter out.

STEPSISTER 1: Cinders! You’re behind with our allowance! I’d say it’s time to COFA up! [Slaps thigh, waits in vain for laughter].

CINDERS: I’m sorry – this looks awfully like a referral fee to me.

STEPSISTER 2: As if we’d care!

STEPSISTER 1: Anyway, we’re off to the Lord Chancellor’s ball. They say Prince Equity will be there, with his enormous package!

STEPSISTER 2: Have you seen him flex his ABS?!

CINDERS: But I’ve nothing to wear. Rupert’s taken the blouse off my back again.

SISTERS: YOU’RE staying here to fill out compliance forms. [Exit, with a flounce.]

CINDERS: Thank Edmonds, that’s all done. And thank you, trainee. What’s your name?

BUTTONS: Ever since they abolished the minimum salary they’ve called me Buttons.

CINDERS: Oh I so wish Kontract, Flakey & Cinders had a bright and shiny new name, one known throughout the land, so we wouldn’t have to rely on those dreadful stepsisters.

BRANDMOTHER: You, Cinders, shall have your wish! For I am the Fairy Brandmother and you SHALL go to the ball.

MYSTERY VOICE: Hold it! Is this building up to a defamatory reference?

CINDERS: Surely not. Anyway, does Section 1 of the new Defamation Act not require a claimant to prove serious harm?

MYSTERY VOICE: All right, but keep it clean.

[Brandmother conjures up a coach, footmen – and a national TV advertising campaign heavy on lachrymose widows and impossibly happy young homeowners in kitchens the size of Norwich.]

THE LORD CHANCELLOR: They call me Failing Grayling,

‘Tis true I’m down on my luck,

My JR reform plans are ailing,

And the barristers don’t give a f-

ALL: F-f-f fair comment in a matter of public interest!

MYSTERY VOICE: I think you’ll find it has to be honest opinion under the new act. All right – but I’m not warning you again.

PRINCE EQUITY [to audience, leeringly]: I wouldn’t mind stripping her assets! [To Cinders] Would you care to see my bundle?

CINDERS: This isn’t Dick Whittington! Oh all right, but I shall have to leave when the clock strikes 12. I charge by the hour.

PRINCE EQUITY: Still? You’re an old-fashioned girl. And I’m supposed to be the one with the exit strategy! After we’ve lived happily ever after, of course. Or at least after the compound interest comes due [cackles evilly].

MYSTERY VOICE: Right, this is in extremely poor taste. This show is closing now.

BUTTONS: But what about my career as a satirical observer of the current legal scene?

ALL: It’s behind you!