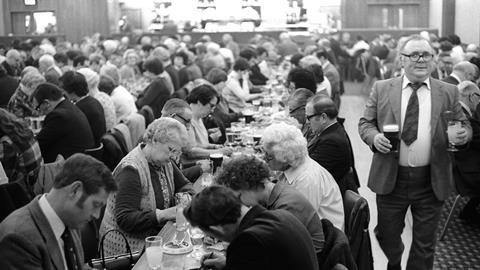 A splendid response to Obiter’s request for unlikely court settings shows that pop-up justice is no novelty. Lester Maddrell of Gloucestershire recalls appearing in many odd venues in a 50-year career as an advocate and tribunal judge. ‘The oddest was in the 1980s when I appeared as a prosecutor for a government department at a magistrates’ court held in the canteen of the fire station in the village of Tisbury in Wiltshire,’ he says.

Stephen Pacey of Newark likewise recalls some ‘pretty strange venues’. These included a room in a museum, a town’s community centre, a room in a library, grotty rooms in small civil service buildings and a room in a large complex of government buildings. ‘In the latter two cases it obviously did not occur to the civil service administrators to pick venues not in any way connected with the government, so as to emphasise the independence of the tribunal.’

However, he says the prize must go to a quaint tribunal room in Hereford: ‘This was small and dilapidated and the premises so manifestly unsatisfactory that appellants could only reach the loo by going through the hearing room.’

Julian Young describes a more congenial setting. ‘Once upon a time there was a magistrates’ court at Ampthill in Bedfordshire which occasionally sat in the front parlour of a public house. The defendant would be led in and seated with a police officer next to him or her, with the lay bench sitting opposite. On one occasion I noticed the usher moving from person to person in the middle of a hearing, speaking to everyone. On challenging his approach to my client, I was informed that he was simply taking the orders for lunch!’

When lunchtime came, the court adjourned and everyone sat down to eat together, he says: ‘Old fashioned justice?’

Richard Whitehurst says a Shropshire working men’s club was the venue for county court hearings in the late 1960s. ‘I can remember appearing on a number of agricultural tied cottage possession cases there. One hearing, just after Christmas, was complete with slightly worn decorations, beer mats and the odd uncollected glass. Judge, advocates and clients didn’t bat an eyelid.’

Whitehurst also has a tale about the Midland Circuit. ‘The story goes that the Lincoln County Court judge used to catch a train and travel to station A, where he heard cases in the waiting room (the morning list), and then caught a train to station B where etc (the afternoon list). He then caught a train home.’ Naturally this was before Beeching and his axe.

Not a hearing, but Michael Rooze has experience of holding a pre-trial conference with counsel in a Renault Espace with the seats in ‘picnic’ configuration. ‘The conference went very well and was the envy of our opponents because their conference had to be conducted in a corridor against the background of the ballroom dancing meeting for local pensioners, which, what with dodgy bladders and loud music, was not conducive to concentration!’

Meanwhile ‘before my time in Yorkshire there used to be a court in Malton. I never saw it but was told by older counsel that the robing room consisted of changing in the churchyard, using the better tombs as a table.’ They breed them tough in Yorkshire, Rooze notes.

Obiter’s favourite tale is from John McMillan of Telford: ‘I well remember appearing in Cleobury Mortimer magistrates’ court up on the Clee Hills in Shropshire where the court sat in the tiny public library. The library books were on shelves fitted with castors and were pushed to each side of the room when the court was in session. It worked well, but I was always a little troubled that, as a defence advocate, I had to sit beneath the sign that said FICTION SECTION.’

A small prize is on its way.