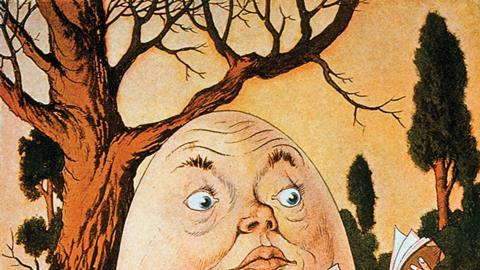 David Chambers of Skegness suggests two old favourites. ‘This Old Man (he plays one) could be done for harassment (and it should noted that his brother’s – The Crooked Man’s – offer, to stand surety, should be declined immediately).’ And ‘Humpty Dumpty (out of our jurisdiction but worthy of a shot) should be made aware that having anything to do with large walls and/or blocking any sort of access will invariably lead to a fall and, after time in the spotlight certainly, an intolerable presence, very likely to get up people’s noses big time.’

Hugh Gentry of Dorking also zooms in on nursery rhyme crime: ‘I had thought that if he had survived, Humpty Dumpty would have been charged with entering and breaking.’

Meanwhile Sam Firth of Salford is burning with rage at an egregious case of social injustice. ‘In order to afford protection to Johnny, it is imperative that action be taken against his new master. While the nature of his work is not specified, it is clear that Johnny’s remuneration (one penny per day) breaches minimum wage legislation. Moreover, it is trite that Johnny’s salary is suppressed due to his inability to increase productivity. This is entirely consistent with a failure to provide any or any adequate work equipment, or alternatively (in the case that Johnny has a disability) to make reasonable adjustments to the workplace.

‘Although the abuses heaped on to Johnny fall within the civil arena, we should not overlook the possibility that the new master is unregistered, and therefore guilty of an offence under the Gangmasters (Licensing) Act 2004.’