Rock and roll (the classical way)

Education secretary Gavin Williamson has announced a £4m boost for Latin lessons in state schools. Presumably each Whitehall department and public body was asked to come up with a big idea for ‘levelling up’. DfE’s idea is more Latin for plebians. 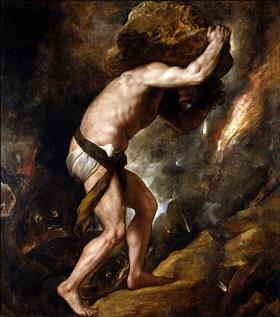 Fortunately, Williamson is not having to boost the classics as a lone heroic, because Obiter notices the Civil Justice Council is doing its bit with what it has to hand. In this case, the Guideline Hourly Rates [GHR], final report.

Mindful that we’re all be quite tired from our extra Latin homework, Mr Justice Stewart’s working group gets to its boost for Roman and Greek mythology in early (page 4). ‘The working group is of the opinion that, while there may be those who might (with some justification) describe the task of revision of Guideline Hourly Rates as Herculean, it is hoped that pessimists who might go further and say it is Sisyphean will not prevail.’

Just in case any readers have stumbled across the report only because they are part of an outreach programme, or they like The Odyssey but couldn’t manage a whole one, footnote 3 of the report quotes Book 11:593 more fully.

‘Then I witnessed the torture of Sisyphus, as he wrestled with a huge rock with both hands. Bracing himself and thrusting with hands and feet he pushed the boulder uphill to the top. But every time, as he was about to send it toppling over the crest, its sheer weight turned it back, and once again towards the plain the pitiless rock rolled down. So once more he had to wrestle with the thing and push it up, while the sweat poured from his limbs and the dust rose high above his head.’

‘Helpful,’ is probably too small a word.

Yet Edwin Coe senior partner David Greene, who sat on the last committee to propose a change to the rates (chaired by Foskett J, its proposals were rejected) was caught unprepared by page 4. ‘Is this the level of ordinary communication and plain English we expect from the Civil Justice Council?’ he asks. ‘I’m surprised there was nothing about the Sirens seeking to break Odysseus on the rocks.’

But perhaps Foskett missed a trick here, Greene reflects: ‘The Foskett Committee did indeed have a Sisyphean task! We rolled the rock to the top and down it went again.’