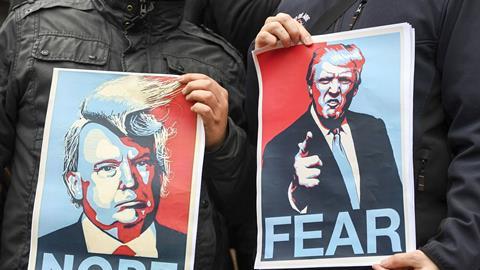 Obiter salutes the US lawyers on the ground – in same cases literally – helping travellers in US airports caught in limbo following the visa restriction order issued by president Donald Trump.

The New York Times reports that lawyers heeded a call for free assistance and based themselves over the weekend at around a dozen airports across the country.

But efforts to defy Trump are not limited to lawyers in the US: in the UK one solicitor has found himself at the heart of the campaign to stop the president making a state visit.

Leeds solicitor Graham Guest created an online petition weeks ago saying that President Trump 'should be allowed to enter the UK in his capacity as head of the US government, but he should not be invited to make an official state visit because it would cause embarrassment to Her Majesty the Queen'.

He admitted to local journalists that it was barely noticed until the weekend's events. Since then, the petition has accrued 1.3 million signatures and become news across the world.

The Yorkshire Evening Post quotes Crown prosecutor Guest as saying he was ‘not politically active’ but was glad to be responsible for highlighting the strength of feeling among some Brits. Guest added: ‘I am not a professional media person, I just did it in my spare time. But these things have a habit of just taking off.’