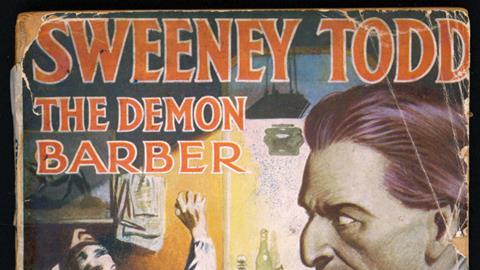 Sweeney Todd is all porky pies

The television channel London Live recently showed the old Tod Slaughter film Sweeney Todd. I’ve always been a fan of Slaughter. He was one of the great actor managers of the 20th century, touring the country in old-fashioned and once hugely popular melodramas such as Maria Marten, The Silver King and Spring-heeled Jack. In fact, I remember being allowed to sit up to see Spring-heeled Jack when it was on television in, I would think, the late 1940s. Only a couple of films in which Slaughter appeared seem to have survived and looking at them people would say that he was just an old ham, but I thought him rather better than Sir Donald Wolfit. Tod died in his dressing room in Derby after being hanged on stage for the umpteenth time in Maria Marten. He was 70.

Sweeney Todd lives on through Stephen Sondheim and Johnny Depp. But what has that to do with the law? Well, his barber shop was said to be at 186 Fleet Street and Mrs Lovett’s pie shop, where Todd’s victims were baked and sold, was in Bell Yard – once the home of a law publisher and now that of a fashionable set of chambers (not to mention the Gazette). Attempts have been made to establish some sort of historical basis for Sweeney but the evidence is flimsy. One suggestion is that he was hanged in 1802 but there is nothing in the Old Bailey Papers.

In fact, Sweeney seems to have debuted in 1847 as a ‘penny dreadful’ serial and then as the melodrama The String of Pearls by George Dibdin Pitt, which opened at the Britannia Theatre in Hoxton and was billed as ‘founded on fact’. It was a huge success and the story quickly spread by word of mouth, becoming an urban legend. Publishers and other authors were quick to jump on the bandwagon. An expanded 730-page version appeared three years later and it was followed by an American plagiarism. In 1865 the French writer Paul Féval moved Todd to Paris and, in Australia, Banjo Paterson, who wrote Waltzing Matilda, found him in bush New South Wales.

I once took some American lawyers on a tour of the Temple but all they wanted to see was Rumpole’s chambers. Perhaps future tours should include a tribute to Tod(d).