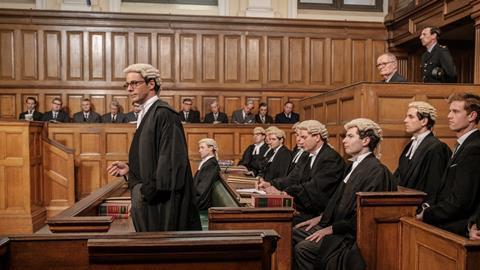 Courtroom film drama can be difficult to write – and not just because of the need to make dull legal exchanges grab the viewer.

No, the real challenge is the need for accuracy knowing that the pedantic lawyers of Twitter (and there are plenty) will unleash righteous fury in 280 characters or fewer.

Quiz for example, ITV’s drama on the Who Wants To Be A Millionaire? cheating scandal, drew the ire of practitioners with such imaginative scenes as the two eventual co-defendants being interviewed together by the police and - truly criminally - a gavel wielded in the Crown court.

Thankfully The Duke, now showing, suffers from nothing of the sort – as you would expect from a script co-written by the BBC’s former legal correspondent Clive Coleman.

The film is based on the case of Kempton Bunton, acquitted in 1965 in Court One of the Old Bailey of stealing Goya’s portrait of the Duke of Wellington from the National Gallery, apparently as part of a campaign for free TV licences for pensioners and war veterans. Spoiler: he got three months for nicking the frame.

Obiter understands the courtroom scenes were filmed in Croydon, but it would be pushing pedantry too far – even for Gazette readers – to hold that against a film in the finest tradition of little-folk-against-the-system understated British comedy.

We won't even grumble that no solicitor gets a look-in. Anyway, Matthew Goode’s performance as Bunton’s counsel Jeremy Hutchinson QC was a highlight: his portrayal of a slightly condescending, thoroughly decent, posh defence silk struck a chord with Obiter, who has spent more time in criminal courts than we care to remember.

Whether in 1965, the era of several-bottle lunches, a 50-year-old QC would have looked quite so spry as Goode is another matter…