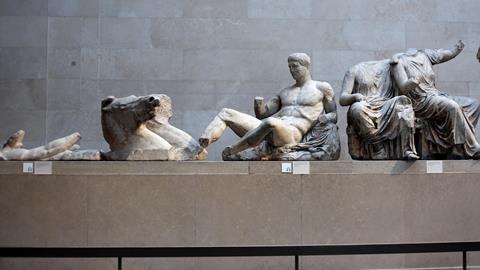 Puce-faced rage is never in short supply on social media. Back in the hot-metal era, however, editors knew of one hardy perennial guaranteed to have Herbert Gussett and his ilk reaching for the Basildon Bond: any suggestion that the ‘Elgin Marbles’ (sic) should be returned to Greece.

It was no surprise, then, to see Mark Stephens CBE’s tour de force at the SPG conference tweak the British lion’s tail.

He doesn’t hold back, Mark. ‘The British have a long and dishonourable history of looting, ransacking, pillaging and plunder,’ he opened.

Stephens had barely sat down before the anti-woke keyboard warriors stirred to life.

‘What a load of left-wing rubbish,’ raged one commenter.

‘They were lawfully purchased by Lord Elgin and then donated,’ sneered another. Well yes, that’s the museum’s ‘position’. And Obiter believes in Santa, but that doesn’t mean he exists.

More diverting was the observation that ‘by the same token, we should transfer Gibraltar and the Channel Islands back to Spain and France respectively’. Mmm. Following the same line of reasoning, shouldn’t someone tell Narendra Modi to give us India back?

All good, knockabout stuff – but the last word goes to Stephens, who, unabashed as ever, tweeted: ‘Amused and astonished at the number of unlawyerly comments untrammelled by knowledge or hearing the analysis. Enjoy the cornucopia of blind – knee jerk, amoral – prejudice.’

Ooof. Mark knows, as Oscar Wilde did before him, that there is only one thing worse than being talked about…