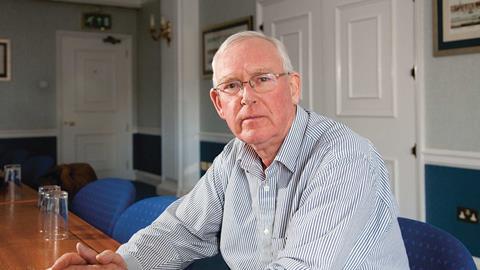 Solicitor Alastair Logan has been typecast as ‘the Guildford Four guy’ since 1989, the year he secured the release from jail of three men and a woman wrongly convicted of bombing two Guildford public houses 15 years earlier. It was perhaps the UK’s worst miscarriage of justice of modern times. It was also a case, he tells the Gazette, ‘that taught me what it is to be on the wrong end of power’.

The ‘combined might’ of the police and the courts, he says, were ranged against him and his clients.

And yet that high-profile case was just the tip of the iceberg. Logan has been a tireless campaigner for access to justice for more than 40 years, standing up not only for the victims of miscarriages of justice, but also for prisoners’ rights.

Now retired and aged 71, he continues to man the barricades, turning his attention to a diverse range of causes, such as police misuse of electroshock Tasers; the death in custody and posthumous trial of Sergei Magnitsky; female genital mutilation; the closure of the Forensic Science Service; and the scandal of overseas war criminals finding sanctuary in the UK.

However, Logan refuses to be branded a troublemaker eager to take on the authorities on whatever issues present themselves. Such a description sits uneasily with, he says, ‘a practising life [during which] I have predominantly dealt with family law and run a specialist family practice with a legal aid franchise in family law, matrimonial law and family mediation’.

Family law? Logan explains: ‘When I came as a family law practitioner to Guildford in 1971 to join George E. Baker & Co, I expanded the practice by getting us on to the panel of legal aid solicitors willing to undertake work in the county and magistrates’ courts. On 10 December 1974 at 10am, I received a call from the clerk that changed everything. He asked me to act for “one of the bombers” because no other firm in town was willing to do so. My client was Patrick Armstrong who, alphabetically, was at the top of the list of the Guildford Four.’

And the rest, as the saying goes, is history? ‘Not exactly,’ replies Logan. ‘I continued with my family law practice, but at the same time stayed with the Guildford Four and the related case of the Maguire Seven from 1974 until 1999, when the compensation issues were at last completed.’

In the meantime, Logan says, he acted as defence solicitor in 11 terrorist trials between 1974 and 1985, all of them referred to him by the Association for Legal Justice in Belfast as a result of his work with the Guildford Four. He also acted in Sir John May’s judicial inquiry into the miscarriages of justice arising from the Guildford Four and Maguire Seven cases, representing eight of the 10 victims of wrongful imprisonment. The inquiry started in 1989 and reported in 1994.

Family law and terrorism cases apart, Logan has had plenty more to keep him busy since he qualified in 1967. ‘I was a member of the Solicitors Assistance Scheme from 1985 to 2006,’ he recalls, explaining that his role involved giving advice and assistance to solicitors who were ‘in trouble’ with the Solicitors Disciplinary Tribunal.

‘Prisoners’ rights, in the UK and at the European Court of Human Rights, have also been a preoccupation,’ he continues. ‘I’ve assisted members of parliament, the campaigning groups Justice and Liberty, and the Law Society on the subject, and have given lectures here and overseas.’

Logan’s interest was sparked when he discovered, during the 1970s, that prisoners had no recorded rights save for a ‘passing mention’ of their right to be informed of the charges against them when facing a disciplinary hearing in jail. He subsequently received instructions from convicted prisoner Ronald St Germain in a case that was to become known as ex parte St Germain 1979, which he took all the way to the House of Lords.

KNOWN FOR Solicitor to the Guildford Four

The lords ruled that ‘under English law, a convicted prisoner… retains all civil rights which are not taken away expressly or by necessary implication’. A right ‘expressly or by necessary implication’ taken away would often include, for instance, article five of the European Convention on Human Rights, the right to liberty; without taking away the right to liberty, of course, the prisons would be empty and have nil deterrent effect.

However, other civil rights, such as the rights to freedom of thought and expression, should remain intact. ‘This case,’ observes Logan, ‘is the founding case of much of the prisoners’ rights litigation that has ensued since 1979.’

He adds: ‘We should embed human rights into lawyers. We should get them young and teach them how to judge between what is right and wrong. And to quote my mentor John Haynes, who trained me in family mediation, we should teach them to try and find the good – or the God – in everyone.’

That was the second time he has mentioned family mediation. Did it play a big part in his work? ‘I pioneered the provision of mediation by sole lawyer mediators in this country and have trained many practitioners, including judges,’ replies Logan. He goes on to list a number of influential posts that he has held, such as director of Oxford University’s postgraduate diploma in family mediation (1997 to 1999) and governor of the UK College of Family Mediators (1999 to 2003).

Since retirement in 2010, Logan has been ‘looking into the irresponsible use of Tasers and other police weaponry. Electroshock Tasers were introduced into this country without proper medical assessment, unless you count the tests carried out in the US on two pigs. It is not known whether they can cause arrhythmia in humans, for instance’.

He adds that Tasers are increasingly being used as a ‘tool of compliance’ rather than in extremis when an officer’s life is under threat. There is even a recorded incident of UK police shooting a 14-year-old girl with a Taser. And a man suffocated when a restraint band was tied around his face to stop him spitting at officers. Logan continues: ‘New weapons are being introduced, again without tests and trials, such as a multi-Taser and a gun that fires a disabling dart. These weapons are unlicensed and unauthorised, and yet are increasingly being deployed on our streets.’

We should embed human rights into lawyers. We should teach them how to judge between what is right and wrong

A member of the Law Society’s human rights committee since March 2011, Logan has played a prominent role in two of its projects. One was writing to Russia’s president Vladimir Putin to protest at the incarceration and death in custody of auditor Sergei Magnitsky. Magnitsky had uncovered a £140m tax refund fraud involving government figures and police officers.

He was arrested, accused of corruption in November 2008 and died just short of a year later after his medical conditions were left untreated. Bizarrely, almost four years after his death, following a posthumous trial, he was found guilty of fraud. Logan comments: ‘This was the first such case since a 13th-century pope was dug up and charged with heresy.’

Logan also represents the committee on the War Crimes Community Involvement Panel, which was set up by the Crown Prosecution Service as a forum to examine how best to prosecute and monitor people living in the UK who are suspected of committing war crimes overseas.

He complains that the government’s policy of allowing people to be admitted to this country if they have substantial assets plays into the hands of war criminals who have plundered their own country to amass wealth. He says: ‘There are 49 suspected war criminals living in this country with apparent impunity. They must be brought to trial.’

Logan is also spending his retirement years campaigning for the reopening of the Forensic Science Service, which the government, ‘in an act of vandalism’, closed in March 2012.

Logan adds: ‘The government closed the FSS because it was losing £1m to £2m a month, but since when does a constituent part of the criminal justice system have to be profitable? The FSS was a national organisation that provided all the required skills to a very high standard. It has been replaced with a mix of private providers and in-house police “toy labs”, where the work is done with an eye for costs, not quality.’

Putting a stop to female genital mutilation is another of his crusades. His involvement was prompted by a clinical negligence claim brought by a client whose medical notes revealed that she had undergone FGM some years previously. Logan says: ‘26,000 girls are at risk of FGM in the UK every year, with the operations usually carried out overseas during summer school holidays by untrained persons. The victims mostly suffer in silence until childbirth, when complications can arise – around one-third die during childbirth in Africa because of FGM.’

His ambition is to see FGM criminalised in this country so that the girls at risk of it now will not require the procedure to be imposed on their own children in the future. ‘It is not a case of changing the culture of Somalia or Mozambique,’ he says, ‘but of stopping our citizens being sent out to these countries to be cut. Not much in human rights can guarantee to achieve its objective in one generation, but that is what this would do. It would be a huge achievement.’

It would also be the crowning achievement of Logan’s long and distinguished career.