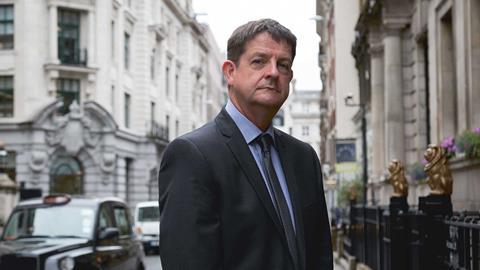 The new Law Society president is using the challenges facing the profession as a chance to re-engage with solicitors.

Andrew Caplen’s background is not remotely of the establishment. His parents had a fruit ‘n’ veg stall in the local market and his wife, a Baptist minister, sports an England football strip with ‘The Rev’ embroidered on the back. His interest in the law was inspired, not by family tradition, but by a ‘long-haired teacher in sandals’.

And for holidays, he chooses long-distance hikes across some of the world’s most rugged terrain.

None of which is to imply that the Law Society’s latest president is not up to speed with the challenges facing the solicitors’ profession. His focus over the coming 12 months, he tells the Gazette, is to improve access to justice in the wake of stringent legal aid cuts. His predecessor, Nicholas Fluck, faced some very public criticism from some lawyers for the Law Society’s response to Ministry of Justice cuts to criminal legal aid.

Is Caplen apprehensive? ‘Of course I am,’ he replies. ‘But I like to see things as half-full rather than half-empty. It’s going to be very challenging, but with challenges come opportunities.’

He adds that improving access to justice is not the sole responsibility of the Law Society and the greater profession.

‘The general public also has a duty,’ he says. ‘The public is interested in education and health because they are seen to affect everyone. But in the public’s eyes, the law is viewed as something that happens to someone else and so is unimportant. We need to spark a public debate about the importance of justice to everyone. The public should become more like the Good Samaritan – willing to help other people, even if there is no obvious personal benefit.’

Caplen adds that he will also focus on building upon the Society’s work on diversity and inclusion so that the composition of the profession reflects the make-up of society at large. The other crucial area, Caplen says, is ‘membership engagement’ so that the Society can better represent and promote solicitors’ interests and work.

What set him on the path to a career in law and becoming Law Society president? ‘I was born and brought up in Hampshire and went to grammar school in Barton Peveril. David Trotter, then a long-haired teacher in sandals, was taking the bar exams and would talk to us about the rule of law and the justice system. Five out of the class of 20 went on to become lawyers, which is extraordinary. I met David Trotter again some years later. He was a barrister, minus long hair and sandals, and a guest at Hampshire Law Society.’

None of Caplen’s five siblings went into law, but all are professionals. One is a higher mathematics academic, another an army officer, two of them are in healthcare and one teaches French. ‘Education was all-important at home,’ he says, adding: ‘My parents came from a strong Methodist tradition where social change was encouraged.’

Caplen read law at university and took the Law Society Finals before becoming an articled clerk at Southampton firm Abels in 1980. He says: ‘John Griffin, then senior partner, was involved in all sorts of pro bono activities and was also on the national committee that, in the 1980s, designed the criminal duty solicitor scheme in Southampton.

‘His view was that if you were a trainee, then you became a duty solicitor, whether you liked it or not. I was to remain one until I became Law Society deputy vice-president two years ago, although I was also able to practise in other areas of the law, such as licensing and advocacy.’

Griffin had another profound impact on Caplen’s career. ‘He told me that if you want to change the world, you need to be actively involved in the change,’ he says. ‘And so he nominated me to become the young solicitor representative on the Hampshire Law Society committee. That was in 1990 and the experience inspired me, in May 2000, to become Law Society Council member for Hampshire and the Isle of Wight.’

Caplen stayed at Abels until 2012, progressing from trainee to assistant solicitor to partner and then to consultant. He is now a consultant at Hampshire firm Heppenstalls, where he advises clients on business planning.

He recalls some of the highlights of his career to date. Two years post-qualification, in the mid-1980s, he was one of the first solicitors to appear before what was then the European Court of Justice (now the Court of Justice of the European Union). ‘All solicitors have the right of hearing in that court if their client is an EU citizen and asks them to act,’ Caplen says.

‘My British client asked me. It was a case concerning tachographs [devices that record information about driving time, speed and distance, and are used to ensure that drivers and employers follow the rules on drivers’ hours]. We won and the case was reported in The Times and elsewhere.’

Still more unusually, he acted in the Consistory Court, an ecclesiastical court founded by a charter of William the Conqueror in the eleventh century. Each diocese of the Church of England has a Consistory Court. Its primary function today is to rule over proposed changes to churches and their furnishings, which are unlawful without prior authority granted by the ‘chancellor’ presiding over the relevant Consistory Court.

‘The church in my case wanted to make changes,’ says Caplen. ‘I was told to win without upsetting anyone.’

Caplen also acted in a 1995 case involving the Queen Elizabeth II luxury cruiseliner following its £26m-plus refurbishment. The ship was due to sail from Southampton to New York, docking early on 22 December 1994 to showcase its facelift at a luncheon for more than 450 VIPs, travel agents and journalists. Instead, it was late thanks to stormy weather in the Atlantic.

It also had on board only around half of the 1,000 passengers who had paid for the crossing – the rest having been ‘bumped’ because the refurbishment work had not yet been completed on their cabins.

Cunard, the liner’s owner, offered disappointed passengers an immediate refund, a free trans-Atlantic cruise in 1995 and credit for on-board purchases by way of compensation. However, some of the passengers remained angry, not least because they felt Cunard should have told them there was a problem before they travelled to Southampton for embarkation.

They asked a lawyer, who had also been bumped from the crossing, to seek redress. Caplen says: ‘Someone had to shoulder the blame and litigation ensued. One of the refurbishers was a Southampton company that had been an Abels client for years and we, naturally, represented them. The case lasted for the first six months of 1996 and eventually settled out of court.’

The interview returns to the subject of access to justice and the now, in many practitioners’ eyes, infamous Legal Aid, Sentencing and Punishment of Offenders Act (LASPO) 2012. The act abolished legal aid for most civil cases involving housing, welfare, medical negligence, employment, debt and immigration.

Critics blame LASPO for forcing the closure of numerous law centres and for depriving the poorest members of the community of the protection provided by affordable access to justice.

Caplen, who was chair of the Law Society access to justice committee between 2008 and 2012, says: ‘Next year is the 800th anniversary of the Magna Carta, which is the backbone of this country’s rule of law. But if people can’t access their rights because it’s too expensive, then the rule of law is meaningless. It is a fundamental duty of government to provide its citizens with ready access to justice. If it refuses to do so, then it is failing in that duty.’

At the same time that civil cases were being progressively deprived of public funding, criminal law duty solicitors have seen their rates of pay frozen for successive years and the MoJ planning to reduce the number of legal aid franchises available to them.

What is Caplen doing about this state of affairs? ‘I’m using it as an opportunity to re-engage with the profession in a different way,’ he replies. ‘Since the December 2013 special general meeting of the Law Society, Richard Miller – the Society’s head of legal aid – and I have travelled the country to talk with criminal legal aid solicitors.

‘We have been to places that the Society has been accused of rarely visiting. We went to North Wales, Sunderland, the south-west, the east and points in between. We sat in front of 30 duty solicitors in Brighton, for instance, who wanted the Society to carry out a major campaign in the national press. They said they were constantly knocked by society and the press, and wanted to be valued for the crucial service they provided. We had to tell them it was too expensive. Our resources are limited.

‘Swansea was particularly challenging. We really had to sing for our supper there, although afterwards we were thanked for coming to see them. On the whole, the feedback was positive.’ The overriding conclusion, he says, was ‘the need to win the public argument on justice.