Black men who inspire me in the legal profession

As part of the Law Society’s series of articles to celebrate Black History Month, I would like to take this opportunity to highlight three black men who have been role models in my career. Without a doubt, they have all played a material part in any success that I have achieved in my career to date. 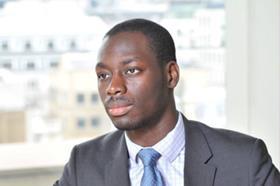 The first is Patrick Fasoro, a senior tax associate at my previous firm, Debevoise & Plimpton. I’ve been fortunate to work with some great tax lawyers in my career, and Patrick is certainly one of the best.

On countless occasions, I would ask Patrick a question which, in my mind, was extremely technical and complex. Patrick was always able to answer in straightforward language, which makes him a dream for any corporate lawyer to work with.

Seeing someone like Patrick perform so well also boosted my confidence in an indirect way. For example, anytime I might start doubting myself for any reason, I would pause and think to myself, 'Patrick can do it, so I can too!'.

Another thing that I respect about Patrick is that, despite his demanding schedule, and the fact that we worked in different departments, he would always make time to talk to me. It was like having an older brother in the office who I could go to, and who I felt comfortable discussing any issue. It was this type of 'safe space' that empowered me to produce some of my best work. For example, I’ve been responsible for several highly successful business development initiatives which I wouldn’t have pursued without Patrick’s support.

The second is Lamin Khadar, who is the pro-bono manager at Dentons in the Netherlands and a global adjunct professor of law at New York University.

We attended law school together just over a decade ago and have remained friends since then. Lamin and I were two of only three black men in our accelerated LPC cohort, which consisted of several hundred people.

Given my youth and inexperience at the time, I found certain elements of the Legal Practice Course (LPC) daunting, particularly on a psychological level. There were times when I questioned whether I really belonged in such a place (which, on reflection, is a ridiculous notion given that I had an excellent academic track record). Lamin was someone who also gave me incredible motivation over the course of the LPC.

In the Bible, Proverbs states that 'iron sharpens iron', and Lamin and I were able to push each other’s performance to a higher level, partly because we both wanted each other to succeed.

The third is Akeem Adagbada, a lawyer who trained at Allen & Overy. In my career, I’ve been fortunate to meet people from around the world. But one of the refreshing things about Akeem is that we grew up in the same part of London and overcame similar challenges.

Anyone who 'knows' London, would know that there are black people, especially boys, who come from certain areas who didn’t tend do so well academically.

People like Akeem completely break the mould. Even though we are the same age, he has wisdom well beyond his years. His counsel has been invaluable to me throughout my career.

Finally, to any black professionals who may read this article, I would encourage you to mentor at least one younger black person in your spare time. For example, I attended state primary and secondary school in South London. I also attended Christ the King Sixth Form College and The London School of Economics at sixth form and university respectively (both of which are excellent institutions). However, in my 17 years in the English educational system, I did not have a single black male teacher for a full academic year. Therefore, it’s possible that you could be the first black role model that an aspiring student will meet.

I’m aware that there are black lawyers, some of whom I’ll never meet, who have helped pave the way for people like me in the profession. I believe that the best way to thank those who have been kind enough to give me guidance is to 'pay it forward'.