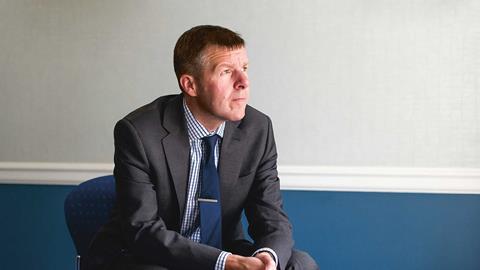 David Greenwood has been acting for victims of childhood sexual abuse since the early 1990s. He tells Jonathan Rayner why the government must start listening.

The mortality figures are horrifying. In one case, in which Greenwood acted for 200 victims of childhood sexual abuse, 11 had died before the court made a finding. ‘They were let down as children,’ Greenwood begins. ‘And then the government neglected their wellbeing as adult survivors, leaving them vulnerable to depression and addiction.’

Greenwood, a partner at Yorkshire firm Switalskis, has acted for victims of childhood sexual abuse since the early 1990s. He has helped hundreds of victims deal with the aftermath of their ordeals, the shame that prevents them talking about what they suffered, the sense of isolation. And yet he is not a hero to everyone.

A December 2012 article by David Rose in the Daily Mail quoted undefined ‘legal sources’ that ‘estimate’ his firm was paid £2m in legal aid for just one case. The article cast a negative light on Greenwood’s actions on behalf of his clients.

But then, perhaps, Rose was following the example set by the prime minister. When David Cameron was a mere MP, he told parliament’s home affairs select committee in June 2002 that the long list of child sex abuse cases on the website of another practice that acts for victims, north-west England firm Abney Garsden McDonald, was ‘almost an invitation’ for people to make complaints. In Cameron’s view, the complainants were the problem, not the abusers, an attitude that appears to reflect the present government’s policy regarding compensation.

And there we have the battle lines drawn: the abused, the abusers and those who seek to distract the public from unpalatable truths by pinning the blame on fat-cat lawyers.

Greenwood came to specialise in child sexual abuse cases through work as a trainee at another Yorkshire firm, Jordans. He was ‘doing the donkey work’ for the criminal law partners when two clients confided that they had both been sexually abused in a local children’s home.

‘I put two and two together and realised there must be many more victims out there,’ says Greenwood. ‘I was already working closely with the police and they began an investigation. I ended up acting for 96 claimants throughout West Yorkshire and have now specialised exclusively in this area of work since 1996.’

After 20 years, he is still not inured to some adults, including members of the clergy, being prepared sexually to exploit children and ruin their lives. ‘I don’t begin to understand it,’ says Greenwood.

‘Some people say that it is learned behaviour, but not everyone who was abused as a child goes on to become an abuser. I’m opposed to categorising individuals into “disordered” groupings. There are so many different factors in play that create each one of us that such categorisation is meaningless.

‘All that can be said with any certainty is that people with the propensity to abuse children often gravitate to where they can act out their fantasies, such as care homes, clubs, churches and young offenders’ institutions.’

These same people, he continues, learn to recognise which children are vulnerable and which are not. They learn to conceal their crimes, often going for years undetected or escaping detection altogether. ‘Why should children in care be treated any differently from our own children?’ he asks. ‘Why can’t they be safe and protected, too?’

He continues: ‘Not stopping abuse will, in the long term, be much more expensive for society than taking steps to prevent it. There will be the costs of unemployment, medical and psychiatric care, repeat offending. Government policy has been short-sighted for decades. It is time it started listening. We need a minister for children in care.’

Greenwood tells the Gazette that one of his clients, Kevin Young, has agreed to allow his story to be told and his name disclosed. Greenwood says that as a boy, Young ‘got into minor trouble’ and was sent to a community home run by a ‘Catholic organisation’ in Yorkshire, where he was ‘sexually abused by the headmaster’. More trouble with the police ensued and Young was next committed to a youth detention centre in County Durham, where he was ‘brutally sexually abused by a senior prison officer’.

After his release, Young needed some years to come to terms with what had happened to him, but by the 1990s he was running his own business and employing more than a dozen men. Then, in 2000, a chance encounter undid the curative effect of the passing years. He had seen his abuser from the youth detention centre, but this time not in the uniform of a prison guard.

He was wearing clerical garb instead. Young, a mature man by now, his brushes with the law years behind him, decided to act. (The abuser from the detention centre has since died.)

What happened next, says Greenwood, ‘demonstrates the tenacity of the opposition we have to overcome in these cases’. The case of Young and other victims against the Catholic school and the youth detention centre was brought to trial in 2005 at the high court in Leeds. Greenwood says: ‘The judge decided that Kevin [Young] was giving credible evidence and ruled in our favour.’

The Catholic organisation running the school and the Home Office, which was responsible for the detention centre, both lodged appeals. ‘The Court of Appeal came down with a harsh decision against the complainants on limitation grounds,’ says Greenwood. ‘It looked like the end of historical child abuse claims. We didn’t know it at the time, but the CoA decision would have meant the Jimmy Savile cases getting nowhere, for example.’

But it was not to be the end of historical claims. In 2008, Young and the other victims took their case to what was then still the country’s highest court, the House of Lords. ‘Lord Hoffmann showed his enormous intellect and broke the argument down to common sense,’ says Greenwood. ‘The case was returned to the high court, where it was settled out of court.’

And, at last, there is a happy ending to a story. ‘Kevin put his compensation into an antiques business and now leads a quiet life in York, dividing his time between the business and looking after his son,’ says Greenwood. ‘He also helps me tutor police officers on how to approach claims of sex abuse.’

Greenwood also acted for 15 girls in the Rotherham sex exploitation case, where in 2010 a gang of five British-Pakistani men were convicted and jailed for grooming girls as young as 12 for sex. ‘This is happening in every town in the country, including my own town, Dewsbury,’ claims Greenwood. ‘We are storing up problems for the future. The girls won’t talk about it now, but when they are in their 30s and 40s, it will be a different story – just look at the Jimmy Savile scandal.’

The problem is by no means confined to grooming. Greenwood instances the case of a male university professor who, in the interests of academic research, posed as a 12-year-old girl on the internet and invited people to meet ‘her’ for sex. He received 100 responses, with 12 men saying they wanted sex. Greenwood says: ‘It’s shocking to think there are so many men out there eager to have sex with a girl who is too young to give her consent.’

Greenwood has a six-year-old son who he hopes will follow him into the law. Given what he sees in his daily practice, is he not afraid for his son? He replies: ‘Life has to be lived and I don’t want him raised in captivity. If you keep your circle of friends tight and teach your children what is acceptable and right, and what is unacceptable and wrong, you should be assuring it won’t happen. But you can never be 100% sure.’

He says child abuse is being brought more out into the open, with increasing numbers of support and campaigning groups springing up. Greenwood is an executive member of the Association of Child Abuse Lawyers and is chair of the Stop Church Child Abuse campaign. He is also a member of three other support groups: Minister and Clergy Sexual Abuse Survivors, Survivors Voice Europe and Care Leavers’ Voice.

All but the last group is focused on the harm done by the church. Is so much of the problem really attributable to the clergy? ‘Yes,’ he replies. ‘For decades the leaders of the Catholic Church and the Church of England have promised to respond appropriately to reports of child sexual abuse. And yet both churches have repeatedly covered up instances of child abuse and allowed clergy to remain in post, even when they have been convicted of the offence. Further abuse often takes place.

‘The Catholic Church in particular has routinely kept allegations from the police. Priests are simply moved to a different parish or diocese, and never face justice and the lengthy prison sentences that they deserve.’

Salvation may be at hand. Survivors Voice Europe reports that in January this year, Pope Francis promised that ‘severe’ new procedures will be used against priests who commit crimes against children. The church, the pope added, is also to ‘embrace’ the hundreds of thousands of victims of sexual abuse by Catholic clergy and make amends for the suffering caused by them.

Is that an effort that has substance to it? ‘It’s too early to tell,’ Greenwood replies. ‘I’ve had a good education and am in a position to help people. It’s a privilege and, if given the tools, you should use them well. I’ve no plans to stop just yet.’