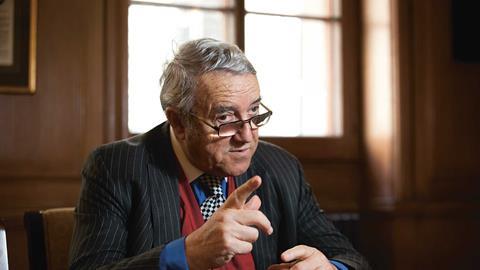 Few solicitors have been jailed in the Soviet bloc, driven a tram in Innsbruck, or shot the breeze with Nelson Mandela. This one has.

It was during an undercover mission behind the iron curtain, says solicitor David Morgan, that he was thrown behind bars for trying to smuggle science books out of Soviet-occupied Hungary. He went on to follow a more mundane career as a tram driver in the Austrian city of Innsbruck only to lose that job after ‘seeing red’ and driving at speed at a communist demonstration.

Next he was appointed a tourist guide in the same city, complete with lederhosen and feathered trilby. Fast forward some years and he was to be found serving in Bosnia as an officer in the Territorial Army.

But perhaps most improbably of all, Morgan tells the Gazette, he found time in his busy schedule to qualify as a solicitor. He started articles in 1963 and retired, 50 years later, after earning a reputation for advising solicitors on a wide range of professional issues. He also picked up an MBE in 2003. However, in Morgan’s instance, retirement means, among a string of other duties, continuing to be a member of the Law Society Council and of the British delegation to the Council of Bars and Law Societies of Europe.

After leaving school, he lived briefly in Germany to improve his German before moving to Innsbruck to work at a refugee camp housing 29 young Hungarian men who had fled their homes to escape the Soviet occupation. ‘One day, 29 letters arrived simultaneously, all purporting to be from the young men’s families,’ says Morgan. ‘It was very suspicious, so I went to London, got a visa and travelled to Hungary to visit the families and tell them their sons were alive and well, and continuing their education.’

It was when attempting to cross the border back to the west that customs officers searched his luggage. ‘I had hidden some Hungarian-language text books that I was bringing back for my refugees between a photograph of Yuri Gagarin [a Soviet pilot who, in 1961, became the first human to travel into space] and a copy of the Daily Worker,’ Morgan says.

‘But the socialist camouflage was to no avail. I was arrested and thrown into prison for attempting to help young people, who had chosen asylum in the west, to continue their education.’

That experience, along with witnessing the misery of his refugee charges (16 young men committed suicide in a nearby camp in Austria), played an important part in Morgan’s decision to pursue a career in law. He began articles at Slaughter and May in 1963 and stayed with the firm, ‘doing mostly corporate-commercial work and litigation’, until 1973, when he became a partner at London firm RA Roberts – a firm set up by UK foods giant the Vestey Group’s in-house legal team.

Some 10 years later he moved to another London firm, Wright Son & Pepper (WSP), as a litigation partner. ‘WSP did a lot of work with the Office for the Supervision of Solicitors, which was later to become the Solicitors Regulation Authority,’ Morgan says.

Bronwen Still, who until 2010 was head of the SRA’s standards team, asked Morgan to put together a committee of panel members who could take responsibility for running the assistance scheme as an independent body separate from the Law Society and SRA. This he did and he was to continue working with the service from 1983, becoming its chair in 1998, until his retirement in 2013.

In that time, he says, his practice embraced all aspects of solicitors’ professional regulation, including appealing against interventions, applications for restoration to the roll, issues concerning practising certificates, applying for permission to employ disqualified persons and disputes relating to indemnity cover.

Morgan adds that during his years with the assistance scheme, he handled around 300 cases for clients, ranging from those who had made a ‘fumble in the jungle’ or, in another of his phrases, were ‘clots rather than crooks’, through to the seriously criminal-minded.

One particular client, he recalls, who proved innocent, allowed him to make the acquaintance of perhaps the modern age’s most admired icon. ‘My client was one of 47 defendants being sued by the Zambian government in the early 2000s. He got an endorsement, a character reference, from none other than Nelson Mandela.’

Mandela telephoned Morgan at his London home at around 7pm one evening. Morgan says: ‘I could feel his charisma burning up the telephone line. He wanted to know what my MBE stood for. I told him that he wouldn’t like it – it means Member of the British Empire. To which Nelson Mandela replied that he had no problem with the British Empire. It’s what came after – South Africa’s National Party and apartheid – which were the problem.’

Other people he came across during his years with the assistance scheme were less universally revered, but nonetheless colourful. Morgan recalls one solicitor, accused of plundering the client account, who stated in his defence that he had not really stolen anything because he went to church every Sunday and promised God that he would repay the lot. He was found guilty as charged.

OTHER ROLES Law Society Council member for the Holborn constituency since 2005; serves on the council’s Legal Affairs and Policy Board and is a member of its EU committee; Territorial Army, 1964-96

Another client, a woman solicitor, had inadvisably – and illegally – done her murderer client some favours while he was in jail awaiting trial. This led to her being blackmailed by her client and digging herself still deeper into trouble with the criminal justice system. All this came out in the hearing before the SDT and the woman, in Morgan’s words, ‘became subject to all sorts of abuse from all sorts of people’. He smuggled her out of the back of the court and down a fire escape. She was also found guilty.

Morgan himself was not above injecting, sometimes accidentally, irreverent humour into assistance scheme proceedings. ‘It was my second meeting with a client,’ he remembers, ‘and he started with asking me to sort out something his wife was concerned about. It seems that in a moment of madness I had referred to my client as a “lying toad” when dictating a letter to him.

‘When my secretary gave me the letter to proofread, I missed that less than complimentary reference. His wife, unfortunately, did not miss it, but I was able to brazen it out somehow.’

Heritage railways have always been a professional – and one suspects, personal – preoccupation of Morgan’s. In addition to his assistance scheme work, he has advised numerous preserved railways, which are run by hobbyists rather than professionals and have refurbished steam engines and diesel locomotives chugging along the lines. Some of these railways serve their local community by providing a transport link to shops and other amenities.

However, they are mostly tourist attractions and an opportunity for enthusiasts to indulge in railway nostalgia.

The trustees are usually enthusiastic amateurs who need someone to help them with land law and the consents – such as safety standards – required in order to operate. ‘Level crossings are especially fraught,’ says Morgan, ‘because when they are mismanaged, the results can be fatal.’

Extending the line brings the ‘special challenge’ of buying a thin strip of land that may pass through different boroughs and ownerships and may even be unregistered, he adds. ‘There may also be the chance of encroachment, where owners move their garden fences to seize a bit more garden at the expense of the railway. The trustees need advice how to fight encroachment if it arises.’

Morgan’s role of adviser has in many instances seen him co-opted, probably quite willingly, to the boards of various preserved railways. He is currently president of North Norfolk Railway plc and, as reported in the Gazette in May 2011, visited the Vatican to ride in the pope’s very own steam train – donated to the then pontiff by Benito Mussolini in 1932.

Alongside this, he has kept himself busy as Law Society Council member for the Holborn constituency since 2005. He presently serves on the council’s Legal Affairs and Policy Board and is a member of its EU committee. He is a past president of the Federation of European Bars and has taken cases to the European Court of Human Rights in Strasbourg. He has also, on the instructions of the Foreign & Commonwealth Office, helped draw up a model code of practice for bar associations in the developing world.

But it is on an account of derring-do that we close. He was happy to oblige. A volunteer on one of his preserved railways approached him, he recalls, to confess to something ‘really shocking’. The volunteer went on to explain that he had absconded from an open prison some years ago, but had just been spotted by a policeman who recognised him. The policeman, along with an accomplice, was now blackmailing him by demanding money in return for not turning him in.

Morgan says: ‘He wanted my help to set up a trap in a London pub. The volunteer was to get the policeman to repeat his extortionate demand and then some honest policemen would swoop and make an arrest. The plan worked perfectly.’

There followed a week-long trial at the Old Bailey, with the blackmailer sentenced at its end to five years in jail. Morgan’s client, meanwhile, had surrendered to the authorities and was returned to prison. ‘I wrote a letter to the Home Office saying that the police were grateful for his actions and he was given full remission,’ Morgan says.

‘He returned to the railway and, some time after, I accepted his invitation to become the godfather of his first child.’