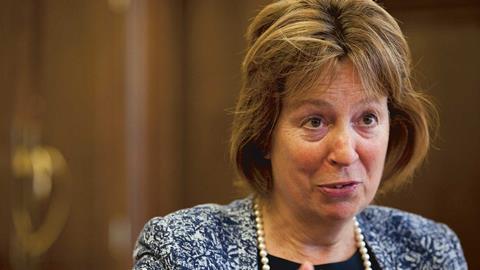 The new president of the European Law Institute talks to us about its work and her frustration at trying to win over Eurosceptics.

We are more European than we realise, claims the new president of the European Law Institute (ELI), English solicitor Diana Wallis. ‘The US is the graveyard of UK companies because the market was not what they expected. They would have been much more at home in Europe.’

Which is all well and good, except Wallis goes on to tell an anecdote about when, as a member of the European parliament (MEP), she was introduced at a constituency meeting in Grimsby, Lincolnshire. The constituency chair said: ‘This is Diana Wallis. She’s from Europe.’ To which Wallis riposted: ‘No, I’m from Hull, which is in Europe.’

And there, in a nutshell, you have it: Europe, in the eyes of many Britons, is still something that exists over there. It is an amalgam of barmy judgments from foreign courts and excessive bureaucracy from, of all places, Belgium.

Some of our country’s politicians echo this sense of alienation from Europe. The Conservatives, most notoriously, are trying hard with their anti-European rhetoric to out-UKIP the ‘little Englanders’. Prime minister David Cameron claims to have been nauseated by one Strasbourg judgment, while home secretary Theresa May got the facts embarrassingly wrong by misunderstanding a judge’s ruling that mentioned an immigrant’s cat.

A referendum is promised to give the British public a chance to vote on whether we should remain in the EU. Human rights, which have somehow become identified with all things bad about Europe, are also under threat. Politicians are openly talking about withdrawing from the European Convention on Human Rights.

So the question must be asked: Wallis sat for 13 years as an MEP, has been a member of the Law Society’s EU committee since 2000 and has just (6 September) become president of the ELI. Has she not had enough of hitting her head against the brick wall of Euroscepticism?

‘It is frustrating to sit in the European parliament making laws that one’s own country may not participate in,’ she replies. ‘Common standards of criminal law across Europe are a case in point. They aim to guarantee protections that we take for granted, such as the right to be represented by a lawyer. But the UK government is refusing to sign up to them. If we don’t take part in the process, then whatever the rest of Europe decides is unlikely to suit us and we’ll be even less happy about Europe.’

It is ironic, says Wallis, that since 2009 the head of Europol, the pan-European enforcement agency that helps EU member states fight international crime and terrorism, has been Wales-born Rob Wainwright. ‘We are anti-Europe and yet contribute a great deal to Europe,’ she says. ‘Even my predecessor at the ELI, its first president, was British – Sir Francis Jacobs, a professor of law at King’s College, London.’

Which brings us back to the ELI. Is it as dry and boring as it sounds? ‘It is not dull at all,’ Wallis says. ‘There is an incredibly good atmosphere and enthusiasm for what we do. Maybe we should communicate better.’

The ELI, she explains, has much the same aspirations as the American Law Institute (ALI), but in the context of Europe. The ALI was established in 1923 to promote the clarification and simplification of US common law and its adaptation to changing social needs. The ELI, on the other hand, was founded in 2011 and has a membership body representing some 50 jurisdictions. It covers so many different jurisdictions because it is not simply an EU body, but covers the same area as the Council of Europe, which has 47 member states.

Wallis says: ‘The ELI is made up of practising lawyers, academics and judges. It undertakes projects, which sometimes examine an existing law and ask how we could rewrite it to improve it. At other times, we look at proposed new legislation and examine its practicality.’

By way of example, Wallis talks of two ‘projects’ that have been completed. One involved a working party tasked with critically examining the proposed Common European Sales Law (CESL). UK member of the ELI council, Sir John Thomas, who earlier this month became lord chief justice, chaired the working party. It made a number of suggestions to help the new law achieve its aims of facilitating cross-border trade while ensuring the highest level of consumer protection. The working party did not examine the CESL’s political dimensions. Its report was accepted by the ELI council on 7 September 2012.

Wallis says: ‘The problem with putting this law and others in place is politics. The political parties are so tribal. One young politician complained to me that she might as well be an axe murderer, she is so unpopular.’

ROLES Qualified as a solicitor in 1983; elected to Humberside County Council in 1994; elected as Liberal Democrat member of European Parliament in 1999, resigned in January 2012; elected president of the European Law Institute in September 2013

Returning to the subject of CESL, Wallis notes: ‘It is not built for complex litigation. It is an optional law, which is the least invasive type of law. If it doesn’t work, no harm is done. It is aimed at small and medium-sized enterprises and consumers, and tries to dispel fears about cross-border trade. It is that simple and unpolitical. You can still use our common law or the British courts if that’s what you want instead. And yet CESL has still not passed into law.’ She also mentions the European single patent law, which so far has been 40 years in the making.

Another completed project was a critical examination of ‘case overload’ at the European Court of Human Rights in Strasbourg. The court has never been able to dispose of cases as quickly as they come in, with the result that there is a constantly growing backlog.

A working party was set up chaired by Paul Mahoney, now the UK’s judge at the court. It made a number of recommendations, accepted by the ELI council in July 2012, around dealing more efficiently with unmeritorious applications and improving case management, including allowing one judge to process applications under the so-called Protocol 14 agreement. The Strasbourg court reports that progress is being made with the backlog and that it expects to clear it completely in the next few years.

As for projects in the pipeline, Wallis relates: ‘We have projects in progress covering insolvency law, European copyright law, criminal law, collective redress and other areas.’

The common aim of all the projects, she explains, is to serve the people and companies of Europe by improving the law and facilitating its application. They aim to produce results that are of immediate practical utility and have a genuinely pan-European perspective.

Hers is not a political appointment, she says: ‘The ELI is an independent, non-profit organisation. Mine is an honorary job. I’ve still got my day job teaching European law to students at Hull University.’

She was initially sceptical about the ELI ‘because I was unconvinced that Europe needed yet another institute’. However, after attending an ELI meeting in Florence in 2011, and after becoming increasingly frustrated with the ‘multi-directional tug-of-war’ that is the daily business of legislating in Brussels, Wallis changed her mind.

‘I was invited to become more involved and to give the opening speech at the ELI annual conference last year,’ she recalls. ‘Something I said must have struck a chord because at this year’s conference I was elected president.’

As for deserving the job, Wallis notes: ‘I’ve been a practising solicitor, specialising in European cross-border litigation and private international law,’ she replies. ‘I also have an academic involvement, teaching law at Hull University. And I’ve been a legislator, sitting for 13 years in the European parliament. I have never been a judge, but I do have experience of different aspects of the law.’

She has also been a member of the Law Society’s EU committee since its inception in 2000. She says the committee is very well respected among MEPs for the briefings and articles it provides and for stating the Law Society’s position on various legal issues.

Wallis also brings good language skills to the job. ‘My grandmother was French and I used to spend the school holidays with cousins in France. I lived in Switzerland for two years, where I learned German, and later I was in practice in London with a German lawyer.’

Wallis was also president of the Institute of Translation & Interpreting, during which time she became one of the first fellows of the Chartered Institute of Linguists.

She is clearly European through and through. Does she think it is only a matter of time before her fellow British citizens also embrace the European community? ‘No,’ she replies. ‘I was out canvassing and an elderly gentleman opened the door. I introduced myself as his MEP. To which he replied: “I’m sorry, my wife and I don’t travel much anymore.” Sadly, he is not alone in being confused about Europe and its institutions.’