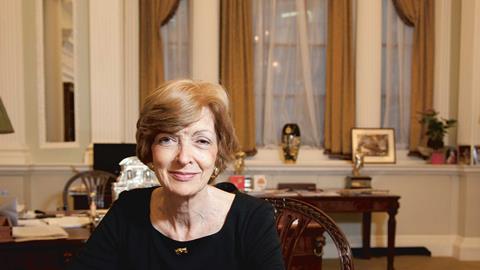 Meet the 686th lord mayor of London, an ambassador for the City.

City solicitor Fiona Woolf is the 686th lord mayor of London in a line that stretches back to 1189. She has a string of archaic titles, such as ‘alderman’ and ‘sheriff’, not to mention ‘court assistant to the worshipful companies of builders merchants, plumbers and wax chandlers’. And embodying her role’s adherence to tradition, on the day after her inauguration she was trundled through the streets of London in a horse-drawn state coach built in 1757.

But despite such dated trappings, Woolf has been an advocate of change throughout her 40-year legal career and has led from the front. She asked to join the partnership at City firm CMS Cameron McKenna and, in 1981, became the firm’s first woman partner. In 2006, she became only the second woman president of the Law Society. She has consistently campaigned for women lawyers to become leaders in the profession. And she is now just the second woman in the 825-year history of the role to be lord mayor of London.

The mayoral programme for her 2013/14 year in office, ‘The Energy to Transform Lives’, underscores that commitment to change. Woolf tells the Gazette: ‘The opportunities for the City of London are delicious. It has energy and talent for innovation, along with an abundance of two key resources: people and capital. The modern world is an economy of cities. We must become tomorrow’s city, not looking in the rear-view mirror, but looking forward.’

As head of the City of London Corporation, within the City Woolf is second in precedence only to the Queen. Getting there was a 40-year journey, she tells the Gazette, from qualification as a solicitor in 1973. She worked at magic circle firm Clifford Chance and remains a partner at CMS.

‘Energy has been the driving force in my career as a lawyer specialising in global electricity reforms at CMS to bring cheaper, cleaner and more energy to more people,’ Woolf writes in the foreword to her ‘686 plan’ for her year in office. ‘My mayoral theme, “The Energy to Transform Lives”, reflects my conviction that the City of London has the energy and talent for innovation to serve the needs of society and the environment.’

She became Law Society president in 2006, which was when she began her involvement with the City’s civic affairs. She attended a City of London Solicitors’ Company banquet in her capacity as president and sat beside the incoming lord mayor, solicitor David Lewis. ‘He liked having the Law Society at his elbow during overseas missions because its International Division has such huge knowledge,’ says Woolf. ‘The next day I received an email from him saying that the ward of Candlewick was falling vacant and suggesting I applied.’

She had not thought of trying to become an alderman before, she says, but was just ‘completely wowed’ that she ‘knew a lord mayor’. She applied, was successful and some six years later assumed the top job, which is apolitical and unpaid.

And it’s quite a job for no pay. The lord mayor’s principal role is as ambassador for all UK-based financial and professional services. To that end, she can expect to spend 100 days of the coming year leading delegations of senior business people to meet government and industry chiefs overseas. During that time, she is likely to make 800 speeches.

‘I’ll be going to 24 countries, with the Law Society, to promote London as a dispute resolution centre and English law generally for doing what it says on the tin,’ Woolf says. ‘Gas trading between China and Russia, for instance, is likely to be documented by a law firm based in London because we alone have the industry know-how. The same applies to most power projects in Africa. English law has become, and must remain, the legal system of choice for commercial trade worldwide.’

Woolf will also carry out a domestic programme of visits, keeping up to date with regional economic activity by meeting business leaders in Liverpool, Manchester, Leeds and other UK cities.

The Lord Mayor’s Appeal 2014 will also keep her busy. The aim of the appeal is to raise around £2m to support four community-based charities that – in common with her mayoral programme – are focused on transforming lives. One of the charities is Raleigh International, of which Woolf is already a trustee. It works to harness the passion and energy of young people to improve life in poor communities around the world. The appeal will also help disadvantaged young British people to become involved with the charity by providing them with bursaries.

‘Raleigh International is about the personal development of young people,’ says Woolf. ‘They work on sustainable projects in the developing world, such as building biogas facilities, capturing water sources so that a village can have tapped water, building houses and putting in place compostable latrines so as to avoid contaminating the immediate environment.

‘The team that we sent to Nicaragua included three former offenders and two young people who were in care. The experience prompted several of them to remain in education, which is expensive and we need to raise the money to pay for it.’

The other three charities are: Beating Bowel Cancer, which supports people affected by the disease, raises awareness of it and stresses the importance of early diagnosis; the Princess Alice Hospice, for which the appeal intends to fund a new model of hospice care by including more specialist medical, therapist and social worker input; and Working Chance, which seeks to transform the lives of women ex-offenders by finding them jobs with quality employers.

That is some workload, but then the role has been evolving for 825 years since the first lord mayor, Henry Fitz-Ailwin de Londonestone, took up office in 1189. He served 24 terms between 1189 and 1212, but the practice of serving multiple terms became rare from the 17th century and stopped altogether in the 20th century.

Fast forward to the 20th century and the name Dame Mary Donaldson (1983) leaps off the page. She was the first woman lord mayor of London and also, incidentally, the wife of master of the rolls (1982-1992) John Donaldson. Some 30 years later, Woolf’s accession to the role made it two women lord mayors out of a total of 686.

The Gazette puts it to Woolf that, despite her example, there is clearly a long way to go before women can be said to have breached the glass ceiling. She responds: ‘I had to ask for a partnership at CMS Cameron McKenna and was the first woman to become a partner. There are now around 50 women partners at the firm, so we have made progress.

‘Nonetheless, women must take responsibility for their own career development and create their own luck. You can ask to be mentored. You can also generate your own development plan, which can be a terrific tool, particularly if you can get the skills and training to back it up through continuing professional development.’

She does not favour quotas as a way of delivering gender equality in the legal profession. ‘Quotas don’t address the underlying issues,’ she argues. ‘Professional services firms and businesses need to ask themselves whether they are applying a true meritocracy. Are they allocating the “hot” jobs across the spectrum, managing talent like the country did for the Olympics, identifying it early and pushing it to the top?

‘Because if everyone comes from the same background, where can innovation spring from?’

Woolf refers back to the time that John Donaldson was master of the rolls and she was chair of the then Young Solicitors Group (YSG). ‘He liked to engage with the YSG and kept saying to us that it was our future and we should become a ginger group for the Law Society and think the unthinkable.

‘And so that’s what we did. We had a debate on why the solicitors’ profession could not advertise. We put in a paper to the Law Society council, which sparked a debate. The Office of Fair Trading picked up on it and the restrictions on advertising were gradually relaxed. That was 30 years ago now.’

What plans for the future? ‘I’m to be the first chancellor of the University of Law from November 2014.’ Woolf describes herself as ‘delighted and honoured’ to be invited to ‘engage with the students’ and help the university contribute to the success of UK law firms. She is an alumna of the institution, formerly the College of Law, and received an honorary doctorate at its first graduation ceremony in 2007.

It has been a long journey from the College of Law to the Mansion House. The Gazette doubts that the indefatigable Woolf has yet reached her journey’s end.