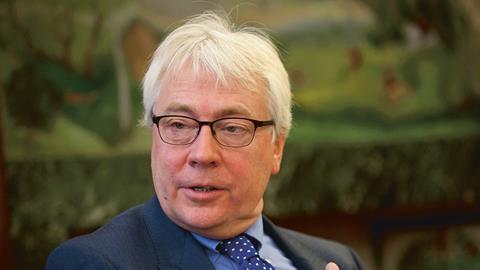 The world of the solicitor spearheading a new charity committed to helping victims of miscarriages of justice.

Solicitor Glyn Maddocks invites you to imagine spending decades in prison for a crime you did not commit. Few ordeals can be more ‘corrosive’ to the spirit, he says. At first, there is disbelief: this can’t be happening! Our trust in the criminal justice system (CJS) tempers the disbelief; surely they will soon find out it’s a mistake.

And then the disappointment of successive failed appeals to the Criminal Cases Review Commission (CCRC), the realisation that your friends and family believe there can be no smoke without fire, ‘the loss of job, home, spouse’. The years passing to the rhythm of prison routine as you are progressively numbed by hopelessness. And always the ever-diminishing scream inside your head: I didn’t do it.

‘Sounds fanciful?’ asks Maddocks, who, as well as being a public law consultant at south Wales firm Gabb & Co, is chair of the board of trustees of the new not-for-profit Centre for Criminal Appeals (CCA). ‘After all, we know that prisons are full of innocent people demanding a retrial, don’t we? But the sad fact is the CJS sometimes gets it wrong.’

He adds: ‘Victims expect the CJS to deliver the right result and are shocked when they are convicted of something they have not done. Society seems indifferent to their plight. The vast majority of the population never experience the working of the CJS, whereas there is outrage whenever the NHS gets it wrong.

‘The attitude seems to be that the CJS is only for criminals, who don’t deserve the best because they are already outside the community. There is a blind faith in the CJS and nobody expects innocent people, in this country at least, to be jailed.’

Actually, it is not quite ‘nobody’. Maddocks has devoted more than 20 years of his career to freeing victims of miscarriages of justice from jail and clearing their names. However, he describes the CCRC appeal process as ‘haphazard’, where ‘only the lucky ones are successful in overturning their conviction’. He cites the case of a man who got into a row with a householder over, of all things, a Christmas tree. The householder was a magistrate and used his influence with the police to get the man jailed for assault and threatening behaviour.

Upon his release, the man was determined to get his life back together. Part of the healing process was to get the carpets cleaned in the house he shared with his wife and two children. He consulted the Yellow Pages and telephoned what sounded like a reputable company.

Maddocks says: ‘He was shocked to discover that the company was owned by the Christmas tree householder, who boasted over the phone that he had perjured himself to secure his conviction. The man called him again the next day, this time with a recording device, and the householder, astoundingly, repeated his confession. He was jailed for perjury and the man’s name was cleared.’

That case revolved around a householder’s willingness to commit perjury, Maddocks observes, and was resolved by luck: there were dozens of other carpet cleaning companies that the man could have called. What is more, who would ever expect to recover his good name courtesy of a criminal’s senseless urge to confess not once, but twice over the phone? In contrast, most of the cases in Maddocks’ portfolio feature police officers conspiring to secure a conviction by withholding evidence or forcing a confession from a mentally vulnerable suspect. The result, repeatedly, is a miscarriage of justice and the wrong person is jailed.

The case of Tony Stock was Maddocks’ introduction to ‘this world of wasted years’ in prison. Stock was convicted of the 1970 robbery of a Leeds supermarket and spent six years in prison. Maddocks says: ‘The conviction went against the evidence and was not even overturned when, in 1978, a supergrass confessed to the crime, named his associates and said that Mr Stock had not been involved.

It is Maddocks’ view that Stock’s admission of guilt, made while in custody, was fabricated. Since his release from prison, Stock, with Maddocks’ help, has repeatedly tried to have his conviction quashed, but although his case is the only one ever to have been referred to the CCRC four times, he has still to succeed. Maddocks says: ‘While I’m still in practice, I’m going to continue with this case until his name is cleared.’

Another of his cases concerned ‘probably the most obdurate and principled guy’ Maddocks has met. Paul Blackburn was convicted of attempted murder aged 15 and spent 25 years in jail protesting his innocence. Maddocks took the case after Blackburn had already been in prison for 12 years, but it was another 13 years before the Court of Appeal found that the police had forged his confession, following testimony from linguistic and forensic psychology experts. Blackburn emerged from the court a free man.

Not all Maddocks’ cases end in triumph. He acted for a Turkish refugee arrested for murder. His family deserted him, believing – because of their faith in the British CJS – that he must be guilty. Left isolated, with no interpreter, he fell apart and was admitted to Broadmoor. ‘I met him three weeks before he committed suicide’, says Maddocks.

Until recently, cases were a solo effort, a sideline to Maddocks’ main practice that gradually began to absorb more of his time. Now, although still a consultant at Gabb & Co, he is part of the team of solicitors and barristers who formed the CCA to work together on a new access to justice initiative that aims to overturn unsafe convictions.

Maddocks describes the CCA as ‘a response to the justice gap’ left when firms, with the withdrawal of criminal legal aid, cannot afford to undertake time-consuming and expensive cases to secure an innocent person’s release. ‘One of the problems with criminal appeals,’ he says, ‘is you get paid late at the end of the process. That’s a poor business model.’

He explains that the CCA is not intended to replace the various university Innocence Projects, where law students take up individual cases of suspected miscarriages of justice. ‘These are excellent projects and we would like to see more young lawyers, after university, getting involved,’ he says. ‘But we are talking about students, at university for just a few years, with exams to worry about, long vacations to enjoy and life to explore. The CCA, on the other hand, has experienced and committed lawyers who can focus full-time on the job in hand.’

He adds that the CCA is also not meant to replace the system of case reviews by the CCRC, which re-examines the documentation and, sometimes, refers the case to the Court of Appeal. The CCA approaches the review from a different direction, he says, interviewing witnesses again, finding fresh witnesses and discovering new evidence.

‘As a consequence, CCA lawyers spend longer in the field than at their desks, which is a departure from most practices,’ says Maddocks. ‘My ambition for the CCA is to produce a replicable model that other groups, such as mental health or human rights lawyers, can adapt to ensure access to justice for clients.’

The CCA is still in its pilot phase, but has already secured the release of a prisoner who spent five years behind bars for a crime, it was able to prove, he did not commit.

‘Is this just the tip of the iceberg,’ asks Maddocks, ‘or is it an isolated case that came about by some freakish combination of circumstances? Should we be like the French woman lawyer who, it is reported anecdotally, said: “Miscarriages of justice? I have never heard of one in this country.” (Pace Dreyfus.) Or should we be wondering how many fellow citizens are languishing in jail for a crime they did not commit? My experience suggests the latter.

‘And anyway, should UK victims of miscarriages of justice really have to rely on the efforts of a charity? Is it not sad and embarrassing that this country, where the rule of law has long held sway, cannot itself guarantee access to justice to its citizens?’

Maddocks continues to man the barricades, but it is not something he and his colleagues at the CCA can continue to do alone. He urges lawyers and firms to come forward and provide the fledgling charity with financial and other support, such as photocopying, reviewing documentation or hosting events. Call Glyn Maddocks on 01873 810 629.

Solicitors Sophie Walker and Emily Bolton, along with a board of four trustees, are pioneering the work of the CCA. Walker and Bolton both worked at anti-death penalty campaigning group Reprieve in the US, while the trustees – all solicitors or barristers – have experience of criminal appeals, prosecuting human rights abuses and bringing civil actions against the police.

Bolton was also the founder of the Innocence Project New Orleans (IPNO), a non-profit law office providing legal representation to the wrongfully convicted in the US. IPNO grew from a staff of one to nine during her tenure and has so far freed 23 innocent prisoners.

Because the CCA is not yet regulated and so does not have its own public funding contract, Walker and Bolton currently undertake casework as consultant solicitors under virtual firm Scott-Moncrieff & Associates’ legal aid franchise.

The CCA already has no shortage of applicants. Walker explains: ‘We wrote an article about our plans for the CCA for Inside Times [a national newspaper for prisoners] and received more than 100 responses. Emily is now sieving them. She received many such letters while working for Reprieve and IPNO in the US and knows what to look out for.’