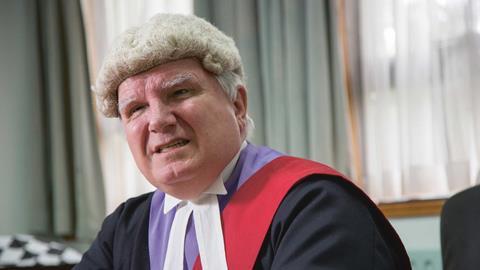 Blindness was just one of the obstacles John Lafferty overcame to succeed in the law, Jonathan Rayner discovers.

His Honour Judge John Lafferty was told early in his working life that as a blind man he had no future teaching sighted children. Earlier still, he had toyed with the idea of becoming a physiotherapist – a calling where the hands are more important than the eyes – but was dissuaded on the grounds it would not stretch his intellect. Instead he returned to university to study law. He has not looked back.

‘With determination you can get ahead, no matter your disadvantages,’ Lafferty says. ‘Those are my words of encouragement to any young person with a disability considering a career in law or another field. You can overcome prejudice with hard work and determination. Agreed, I never got to play for my beloved Celtic or drive a car, but I did overcome other hurdles in life.’

Lafferty was born in Coatbridge, North Lanarkshire, once known as the ‘Iron Burgh’ because its prosperity was based on blast furnaces. By the mid-20th century, the coal seams were exhausted and the steel industry went into decline. It was into this working-class community that Lafferty, the youngest of five and blind from birth, began to make his way in life.

‘My father worked in heavy industry and my mother was a dinner lady,’ Lafferty says. ‘I went to a special school for children with mental and physical disabilities. I left at 16 with no formal qualifications. The teachers said I was bright enough, but nobody expected me to benefit from education. Without my blindness, I would have learned a trade. I could have trained as a blacksmith or coal haulier. I love my old town and would still be there to this day.’

Instead, with the guidance of two teachers, he went on to take O-levels, Scottish Highers, and A-levels in English, history and economics. He took a degree in English and history at the University of Strathclyde before spending two years in Cameroon, working as an administrator at a training centre for blind people. He also helped the centre attract aid from the developed world and ‘did a bit of teaching’.

Upon his return to Coatbridge, he took up a teaching position – it was then he was told he had no future in that particular career. The law and the University of Leeds beckoned. How was he able to cope with study? ‘I had lots of friends who read aloud for me,’ Lafferty replies. ‘I also got hold of some tapes and taught myself to read braille. I’d developed an organised memory by then, too.’

He graduated in the early 1980s and spent the next two years trying to find a firm that would take him on as an articled clerk or, as it is termed today, give him a training contract. ‘I made 300 applications,’ Lafferty says, ‘which may be the norm in 2015, but back then articles were easier to come by. I have met scepticism and prejudice of all kinds. At one interview at a York firm, for instance, I became aware they were holding my nationality against me. Apparently, I was somehow to blame for a Scottish army burning the city’s suburbs some 700 years ago.’

He returns to the problem of prejudice against blindness. ‘In my view, blindness adds a huge additional challenge to all the other hurdles in life that sighted and unsighted persons must overcome. Many prospective employers are unable to make the leap of imagination to see how a blind person can do a job that is regarded as difficult, such as practising as a lawyer.

‘This attitude explains why around 70% of visually impaired people of working age still can’t find a job. Even the most able candidates can’t get pupillages or training contracts. Some City firms are making an effort, but potential employers, it seems, are always going to be anxious. Prejudice in today’s allegedly inclusive age is as bad as it was in my era 30-odd years ago.’

Is there a solution? ‘If you can just have a dialogue with a prospective employer, your blindness – and even your Scottish accent – will be disregarded and their anxiety eased. That’s what I hope my history will help achieve; telling employers that everything is possible. Hard work and determination will allow you to overcome all obstacles.’

On 1 May 1983 Lafferty at last became articled to Edward Fail Bradshaw & Waterson, based in the East End of London. Why did such a distinguished firm offer him articles when all others had refused? ‘They told me I was the best candidate,’ he says. ‘The firm is extremely highly regarded by everyone, including the judiciary. It’s a tough firm, but dead straight.’

Lafferty says: ‘I did some criminal work, but I was primarily a civil litigator: personal injury, housing, defamation, clinical negligence, commercial advice for small and medium-sized enterprises. I was very much a general practitioner, which I enjoyed immensely. I would recommend the high street criminal sector to all up-and-coming lawyers. It’s an honourable calling, stimulating, challenging and interesting, if hard work – but then you could say that about all areas of practice.’

Were clients concerned about his blindness? ‘No,’ he says. ‘I really like the people of the East End. It’s a wonderfully diverse community and it was a pleasure to help people like them get compensation, get rehoused or resolve business disputes. They are so similar to the people I was brought up among in Coatbridge. They’re hardworking and have a tremendous sense of right and wrong.’

In that time he was a trustee for two four-year terms of Sightsavers, a UK-based international charity which fights avoidable blindness and promotes equal opportunities for visually impaired people. ‘You’re only allowed to serve two terms as a trustee,’ he says, ‘so now I have to be content with just working for them. Some people do good deeds because they want others to know about it, some because they are worth doing. I think I fit into the second group.’

So why become a judge? ‘I enjoy law as a discipline,’ Lafferty says. ‘As a solicitor, you are there to represent your client. The process is very partisan – you and your client against the opposing party. Whereas being a judge is a public service. A judge’s unswerving duty is to ensure that everything decided in his court is fair.’

Was the application process ‘fair’, too? ‘When I was applying to become an assistant recorder [a part-time role that no longer exists],’ he replies, ‘I wrote a long letter addressing what I believed would be the lord chancellor’s concerns.’ These concerns were practical ones, such as a blind person coping with mounds of paperwork and whether a blind person could observe the demeanour of the accused and witnesses: ‘And I said in my letter, here are my strategies for overcoming these perceived problems.’

He was given the ‘standard interview’, he says, and then an extra one ‘thrashing out challenges and strategies’. Again he advises lawyers who have a disability: ‘The really important thing is to acknowledge the challenges and be realistic about how you intend to address them. You should convince any prospective employer, whether it’s HM Courts and Tribunals Service or a private firm, that you have not simply decided to ignore the challenges and hope they will go away. You should show the easy self-confidence that comes with successfully overcoming them.’

He became an assistant recorder in February 2002, then a recorder (also part-time), before becoming a full-time judge in 2007, sitting at Snaresbrook Crown Court. Snaresbrook is the UK’s largest court with 20 Crown courts serving Greater London. Last year 4,400 cases came to trial there. It is an extraordinary institution, resembling a stately home or public school, set in 18 acres of grounds with a lake, Eagle Pond.

Lafferty has come a long way from his working-class roots in Coatbridge. How do friends and family who are still there regard him with his scarlet robes and horsehair wig, his establishment status and Who’s Who entry? ‘My best mate when I was eight is still my best mate,’ he says. ‘We grew up together, watched Celtic together and – now we are both 65 – are as close as ever. He doesn’t think of me as a judge. The real test of success is not the glittering prizes, but how you keep your friends.’

And his family? ‘My parents taught me that you could have anything you want, but that you had to work hard for it. I grew up with an innate sense of belonging and self-esteem. They saw me qualify as a teacher and were immensely proud. Sadly, they didn’t live long enough to see me become a judge.’

In closing, Lafferty reflects: ‘If you do things just for the trappings of success, you will get the rewards but not the pleasure. It is all-important to enjoy what you do. I enjoy the idea of doing justice. I thoroughly enjoy Snaresbrook Crown Court. My colleagues are friendly and supportive, and we swap information in our annex chambers.

‘My parting advice to law students, trainees and newly qualified lawyers living with a disability is that if you want something badly enough, you can achieve it through hard work and determination.’

JOBS articled (1983) at London firm Edward Fail Bradshaw & Waterson, where he rose to become managing partner from the mid-1990s to 2005; became a full-time Crown court judge in 2007