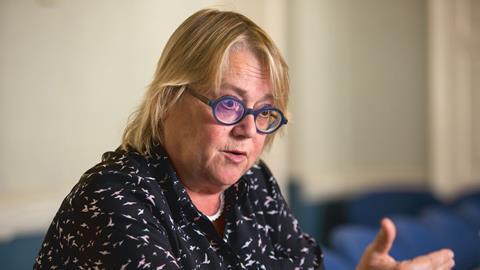 The former Law Society president reflects on an eventful career, including her latest role overseeing the Lords. Jonathan Rayner reports.

‘I don’t approve of the tap on the shoulder,’ says newly appointed House of Lords commissioner for standards Lucy Scott-Moncrieff. ‘Which is lucky because it’s never happened to me.’

Her latest high-profile role, which she assumed on 1 June, was ‘openly advertised’. Is the former ‘legal aid lawyer from north London’ comfortable with becoming one of the great and the good? ‘It was never my ambition,’ she says, ‘but if you want to get things done…’

Getting things done is Scott-Moncrieff’s hallmark. Almost 30 years ago she founded SCOMO, the ‘very first virtual law firm ever, possibly in the whole universe’. The firm now has 60 lawyer consultants and provides them with the ‘whole shebang’ of support around regulation, employment law and the other fundamentals of running a business. ‘We know what we’re doing,’ she says, ‘because we’ve been doing it a long time.’

Scott-Moncrieff was Law Society president in 2012/13 and remains a council member. She sits on the Judicial Appointments Commission, is a mental health tribunal judge and a senior associate for Verita, a body that – according to its website – ‘provide(s) independent expertise to enable regulated organisations to improve their services and outcomes’. She also found time last month to visit China as part of a British Council-led delegation to discuss the provision of legal aid for people with special needs.

To begin with her latest high-profile role, the House of Lords is the second-largest legislature in the world. Nobody is elected and successive party leaders stand accused of stuffing its benches with party donors, pensioned-off MPs and cronies expected to toe the government line. As a result of constantly installing new members, there are more than 850 members of the Lords, but seating for just 240. How can Scott-Moncrieff even begin to police standards in such an institution?

She replies that as commissioner she does not have the power to ‘ordain’ penalties for wrongdoing, only to investigate complaints that are submitted to her. If she finds a breach of the Lords’ code of conduct, she forwards the complaint to the ‘relevant’ Lords’ committee, which will take appropriate action. The words ‘public interest’ feature prominently in the code. For example, the first general principle governing members’ conduct reads: ‘Members of the house shall base their actions on consideration of the public interest, and shall resolve any conflict between their personal interest and the public interest at once, and in favour of the public interest.’

What might a code breach look like? ‘A typical minor breach is where a member has not declared an interest, but has not benefited from doing so and nobody else has suffered a loss,’ she says. ‘We are likely to accept that it was a genuine mistake and only require the member to issue an apology. But if that same member omits to declare an interest over and over again, then we will take the view that the omission was deliberate and refer the case onwards.’

What defines an interest? ‘Suppose the Lords were debating an amendment to shipping law and a member who’s a shipping magnate puts forward an argument that appears to favour ship owners. The magnate must declare an interest, but at the same time it would be daft not to hear what they have to say. After all, the magnate is the expert in the field and it is up to the other members to judge whether they are arguing in the public interest or hoping to benefit personally.

‘There are political as well as commercial interests. If someone was known as a hardline Tory MP in the Commons, for instance, it would be unreasonable to expect him to become politically neutral in the Lords. But again it comes down to public interest versus personal interest. If that same former MP is a major shareholder in the sector that is being debated, then he should declare his interest – because the value of his shares may change if the legislation goes through.’

It sounds a challenging role. ‘But it’s just for five years, non-renewable,’ Scott-Moncrieff says. ‘That way there is no question of doing the “right thing” so as to be reappointed. Public interest versus personal interest again.’

We turn to Scott-Moncrieff’s recent trip to China, where she visited a legal aid centre in Xicheng, a district of Beijing with a population of 1.5m, and also went to a community centre for people with mental and physical disabilities. She returned enthused by the way Chinese lawyers are striving to help some of the community’s most vulnerable people.

‘The legal aid centre employs its own lawyers and also calls upon Xicheng’s 3,300 lawyers, who are professionally obliged to take on one or two legal aid cases a year,’ she reports. ‘Legal aid was only introduced into China in 1996 and so, in contrast to the UK over recent years, the Chinese speakers, including those from their own Ministry of Justice, exuded a sense of optimism.

‘The Chinese government is committed to increasing scope and eligibility year on year, again in contrast to the UK. The underlying philosophy is that legal aid should help achieve social equity and justice, as well as strengthen the rule of law. That, again, is in stark contrast to the way legal aid in the UK has retreated from being a service covering most areas of law to one restricted to limited areas of law and circumstances.’

Is Scott-Moncrieff holding up China as a beacon of enlightened law-making? What of its history of summary executions, brutal suppression of dissent and organ farming of Falun Gong and other political prisoners? ‘It’s possible to applaud one and deplore the other,’ she replies. ‘Jumping up and down and shouting about political issues would have undermined what we were trying to achieve, which was to learn from one another what legal aid can achieve for people with disabilities.’

She rejects the criticism levelled at her by one Gazette online poster that she is like ‘one of those useful idiots’ who made the pilgrimage to Stalin’s USSR in the 1930s and came back full of praise? ‘We are not propagandists,’ she counters. ‘The British Council trip was intended, through the medium of legal aid, to help improve the lot of vulnerable people in China. We weren’t seeking regime change.’

Chinese lawyers are ‘professionally obliged’ to take on some legal aid work every year. Would a mandatory obligation to carry out pro bono work be effective in the UK? ‘We can’t capture how much pro bono UK firms are already doing,’ replies Scott-Moncrieff. She explains that most of the larger firms include pro bono in their business plans, but that high street and sole practitioners rarely record it. ‘I suspect that much more work is done pro bono than we can measure. Not doing anything pro bono, it seems to me, is the exception rather than the rule. And so it’s hard to estimate just how much capacity the profession has to do still more.’

The interview moves on to criticisms levelled by Liz Truss, the UK’s first woman lord chancellor, that the upper echelons of the judiciary are insufficiently diverse. ‘I’m glad she said it,’ says Scott-Moncrieff, ‘not least because increased diversity is within her gift.’

Scott-Moncrieff explains that the Crime and Courts Act 2013 made flexible working available to judges in the High Court and above. There has been scant evidence of change, however, with most High Court judges continuing to work full-time. This has proved a barrier to diversity because the traditional route to the top ranks of the judiciary is through the High Court, with all its attendant obligations, including the requirement to travel on the circuit and spend nights away from home – an unattractive option for women with caring duties.

However, fresh opportunities for change are fast approaching as Supreme Court judges and the lord chief justice reach statutory retirement age. This is Truss’s chance, says Scott-Moncrieff, to encourage senior judges to embrace the flexible work regime offered by the act. ‘If five full-time High Court judges are replaced by 10 part-time High Court judges, we will have a wider range of experience to cover a wider range of issues,’ she states. ‘The door will be opened to a wider pool of talent for the most senior positions in the judiciary, such as the Supreme Court. Candidates would include women who might otherwise have baulked at the full-time demands of the High Court. This is within Truss’s gift. She will need to consult the profession, but in the end it is her judgement call.’

Drawing the interview to a close, Scott-Moncrieff is asked to comment on the government’s stated intention to withdraw from the European Convention on Human Rights in time of war. This derogation, the government asserts, will protect UK troops serving in future conflicts from the kind of persistent legal claims that have followed operations in Iraq and Afghanistan ‘on an industrial scale’.

She responds that derogation from the convention may be justified at times of national emergency, but ‘cannot be done just willy-nilly’. She echoes Law Society president Robert Bourns’ warning that derogation could risk removing legitimate rights from all people, including members of the armed forces

Finally, Scott-Moncrieff makes a point of lauding the Law Society’s Excellence Awards, due to be conferred as the Gazette went to press. The awards, she says, are constantly adding new categories for recognition, with this year seeing an in-house team award for the first time. The judges, whose decisions were announced at last week’s ceremony, were looking for in-house teams that exhibited a ‘unique blend of legal and other skills, such as leadership or innovation.’

Scott-Moncrieff was one of the judges. ‘I was very happy to be a judge,’ she says. ‘My days in the sunlight are now finished.’

The Gazette doubts that.