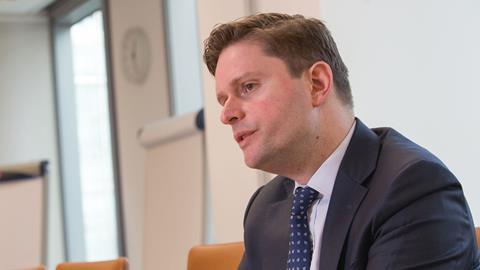 In-house clearly suits Michael Coates, UK head of legal at oil giant Shell. ‘What I enjoy most about working in-house is owning the implementation of advice and seeing it through from start to finish,’ he enthuses. ‘It’s being part of the team, working at the coalface as a full team member rather than as an external adviser.’

He observes that he is not alone in his enthusiasm for the in-house role. ‘Some 25% of all solicitors now work in-house,’ he points out. ‘It’s a growing trend for more and more companies to want a lawyer sitting at the table to help ensure that things are done in a legally sound and correct way.’

Viewed solely in numbers, Shell is a daunting challenge for any lawyer with risk and compliance responsibilities. It operates in 70 jurisdictions, employs around 94,000 people and last year reported revenues of £187.25bn. Its legal team alone comprises around 1,000 staff, of whom 200 are based in the UK.

In addition to being UK head of legal, Coates is associate general counsel for Shell’s downstream business. Downstream, headquartered in London, is focused on turning crude oil into a range of refined products, which are moved and marketed around the world for domestic, industrial and transport uses. Shell’s international network of 44,000 service stations, including 1,000 in the UK, is part of its downstream operation.

That is not the end of Coates’ responsibilities. He is a director of several Shell companies, including Shell UK Ltd, its principal operating company in the UK. He is also active in a number of legal bodies, including the Law Society’s in-house and GC350 divisions.

Coates was born in Australia and read for separate bachelors of economics and of laws at the University of Sydney. In 1997, he joined Clayton Utz in Sydney, one of Australia’s largest and most prestigious law firms. ‘While at Clayton Utz, I rotated through a number of departments undertaking contentious and non-contentious work,’ he says.

He moved to Slaughter and May in London, where between 2001 and 2004 he practised as an England and Wales solicitor with a focus on corporate finance, securities law and mergers & acquisitions (M&A). ‘During some of that time,’ Coates recalls, ‘I was seconded to Shell and that was when I decided to steer my career towards in-house. I joined Shell in 2004 and have since worked at its headquarters in the Netherlands and in London.’

He is asked to describe the highlights of his 12 years at Shell. He replies that between March 2011 and December 2013 he was secretary to the Shell group executive committee and special adviser to the Shell CEO. Before that, on joining Shell in 2004, he worked at Shell’s headquarters in the Netherlands supporting international energy and M&A projects in Europe, the US, Latin America, Australasia and sub-Saharan Africa.

Coates is also keen to touch upon the evolution of the profession and how this is manifested by in-house legal teams. ‘There is fantastic innovation going on in law firms and those firms that don’t innovate are unlikely to be around much longer,’ he says. ‘Innovation, after all, is ultimately to the benefit of clients. In-house must similarly innovate. At Shell, for example, we have an extra 18 hours training a year in addition to the annual continuing professional development requirements.

‘The in-house role is changing rapidly and we are now at the forefront of compliance, for instance. We have to provide support very quickly as the law becomes ever more complex. We are an independent voice that, while still having duties to the courts, speaks the truth as we see it – which may sometimes be unpopular, but is unique to the in-house role.’

At Shell, Coates says, the in-house team is ‘constantly looking at ways to control the cost of using external counsel, and to move away from the traditional hourly rate for fees’. To this end, the legal team is ‘beginning to roll out appropriate fee arrangements (AFAs). These are sometimes called alternative fee arrangements, but at Shell we believe that “appropriate” more closely reflects the aligning of our and the law firms’ interests – because they have advantages for both parties’.

An AFA can broadly be defined as an arrangement that does not include hourly billing, but could incorporate any combination of contingency fees, success fees, fixed rates for repetitive volume work, law firm investment in a legal project so that risks and profits are shared, a project divided into phases and each phase paid for by pre-agreement as it is completed, and other ingenious ways of completing a transaction to the satisfaction of both parties.

Coates continues: ‘AFAs allow risks and rewards to be shared between Shell and external firms. They provide budget certainty. They improve efficiencies, communication and risk assessment between us and the firms. They enable the relationship to grow stronger. And, crucially, they reduce costs. We plan to use our AFA experience to structure value-based deals and shape industry practice. And we plan to continue to roll out AFAs across the business.’

Another innovation is ‘changes we have put in place regarding contracts and procurement’, Coates notes. He directs the Gazette to a speech delivered by Donny Ching, Shell’s global legal chief, at the Law Society in December 2014.

‘Shell engages in millions of contractual transactions and, at any time, manages over 25,000 larger contracts with many tens of thousands of suppliers, spending over £46bn per year with third parties,’ Ching said. ‘With no standardisation in place, we used to end up with very different terms and conditions, which meant… different prices for the supply of fundamentally the same product in different parts of the world. We were also losing out on opportunities to leverage our volume spend, as each country was allowed to do its own thing.’

Taking up the story, Coates observes that it was no easy task developing standard contracts that would cover all the jurisdictions in which Shell operates or sources from. Surprisingly, he says, ‘the standardisation process was the easy part – relatively speaking. The harder part was changing people’s mindset from one that naturally expected our standard terms to always protect Shell to one where we engaged and listened to suppliers, and drafted standard terms that were much more balanced.

‘The task completed, we put all this on to a software platform and then Shell’s standard model contracts library, coupled with a new process and new mindset, was ready to be rolled out in January 2011. Much of the credit goes to an individual in-house lawyer who had the courage not just to influence the decision to proceed, but also co-led the project to influence the outcome.’

The benefits, Coates says, have included reducing the time it takes to negotiate contracts: ‘We’ve reduced our third-party spend by billions of dollars and cut the number of lawyers working on procurement contracts by more than half.’

In addition to addressing the compliance and myriad other issues that come with superintending one of the world’s biggest energy companies, Coates also finds time for the not-for-profit sector. He serves on the development board of the Bingham Centre for the Rule of Law; sits on the curriculum review committee of the Energy and Natural Resources Law Institute at Queen Mary, University of London; and is treasurer of the corporate and M&A law committee of the International Bar Association.

Coates is a member of the advisory panel of the Law Society’s GC350 division, which is aimed specifically at GCs or senior legal managers working at FTSE350 organisations or their equivalent. GC350 works alongside the Law Society’s In-House Division to promote, support and represent the interests of in-house lawyers and their departments.

‘Shell appreciates the Law Society’s efforts in this area of practice,’ Coates says.

In this context I pick him up on his intriguing use of the term ‘prudent overreaction’ during his address to last year’s In-House Division conference. Coates explains that he used the term in connection with the role of general counsel in handling a crisis. ‘It means that members of staff are positively required to escalate any potential crisis to senior management as soon as possible without fear of embarrassment or disapproval,’ he says. ‘The intention is to ensure that all matters which could conceivably develop into a crisis receive early attention from senior management, even if ultimately the matter is resolved before a crisis develops. Put simply, it works on the principle that it is better to be safe than sorry.’

At a politically and reputationally exposed corporate behemoth like Shell, ‘better safe than sorry’ would seem to be wise counsel indeed.