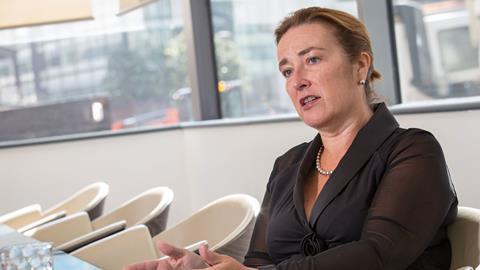 Rosenblatt’s pioneering chief executive used to own Brands Hatch. She talks to Jonathan Rayner about doing law in a different way.

Nicola Foulston, new chief executive of City firm Rosenblatt, was still not 30 years old when, in 1996, she was named Veuve Clicquot Business Woman of the Year. She was, and remains, the youngest recipient of the award. Foulston has since added many other achievements to her CV, including selling the Brands Hatch motor sports business, valued at £6m in 1990, for £147.6m just nine years later.

The Gazette ventures that it was an impressive outcome for a woman who was appointed to the Brands Hatch board in 1990, aged just 22. Foulston shrugs. ‘A friend told me I’m an alpha male, not a typical woman,’ she says. ‘Apparently, I talk like a man and am happy to join colleagues for a drink, again like a man. I’m almost scarily good at compartmentalising. When I’m at work, I’m totally at work. I approach it in a dispassionate way, without bringing emotions into it. Again, or so I’m told, like a man.’

In addition to her new role at Rosenblatt – she has been in place since 1 September 2016 – Foulston has private equity interests in the US and Europe through VV Capital, which she chairs. She is also a board member of the Industrial Development Advisory Board, which advises ministers on applications from companies proposing to start capital investment projects in the assisted areas of England. These are economically weak areas in which government, under European Commission rules on state aid, can offer financial support to businesses in order to encourage growth and increased employment locally.

Foulston’s stellar CV nevertheless lacks one seemingly crucial element to becoming the CEO of a major law firm. Foulston is not a lawyer and has never previously worked in legal services. How does she explain that anomaly?

Foulston replies that she has known Ian Rosenblatt, founder and senior partner of the firm, since she was 19. She was that age when her father, who had bought the Brands Hatch racetrack in 1986, crashed and died while test-driving a McLaren. Foulston inherited the business and in the early years was invariably accompanied to meetings by Rosenblatt, who advised and guided her.

He remained her lawyer and was the obvious choice, some 30 years after Foulston’s first venture into business, to advise on her next steps once her children were secondary school age and she again had time to devote to pursuing her career. ‘We had talked about it before and Ian urged me to think again about bringing my commercial skills to bear in the incredibly competitive environment of legal services,’ she says. ‘I am excited by the challenges facing the profession – more and more commoditisation, competition from non-lawyer service providers, globalisation.

‘My decision to join Rosenblatt was made all the easier because Ian is a very entrepreneurial lawyer. Two weeks into the job he is already allowing me to take over some of the commercial management of the firm so that he and the other fee-earners are best placed to exploit opportunities as they arise. In fact, I’ve taken more than 25% of Ian’s and the senior partner’s administrative work from them.

‘If you regard the firm’s solicitors as your sales team, my providing commercial management support clears their desks of non-legal duties so they can focus on their core business – client care and providing understandable and timely advice.’

Is being the CEO of a law firm much the same as heading up any other business? ‘There are similarities,’ she replies. ‘My first weeks here have reminded me of my first weeks at Brands Hatch. I’ve been looking at financial margins and asking why certain textbook business principles are not being applied. Is that because they have no application in a legal context or is there another reason?

‘A major challenge is to do things in a new way, not for the sake of change for change’s sake, but to take things to the next level. We did this at Brands Hatch, transforming a sport that was run for the participants’ benefit to one that was a hugely profitable business. I want to try and achieve something similar here.’

What are her objectives? ‘To double the financial size of the firm in the next few years,’ she replies without hesitation. ‘That’s not to say doubling headcount, but to support growth in revenue and profit margins. So long as we have the working capital to support growth, there is no reason why we can’t achieve this.’

She identifies one small but significant way in which all firms can keep focused on generating revenue. ‘When I see heavy-hitters typing emails, I’m forced to ask whether they are wasting valuable fee-earning time. Shouldn’t someone more junior be doing that sort of thing?’

Is there any one initiative that she sees as a priority? ‘Good communications are all important,’ Foulston asserts. ‘Good communications are what make a business successful. I’ve been running companies from a very young age and have seen the evolution from handwritten memos to emails. But what hasn’t changed is that communication, whether with clients or colleagues, is the first thing that happens when providing a service.

‘It is very easy to email clients or one another rather than talk, but that can just be lazy. Verbal communication should always come first and written second. My priority is to ensure we always maintain regular spoken communication with clients. Ian and I are on the same page with this. That’s one of the benefits of being good friends. I’m on his wavelength and have similar views about how we should do business.’

KNOWN FOR becoming CEO of Brands Hatch at 22 years old, when it was valued at £6m, and selling it for £147.6m nine years later. Youngest Veuve Clicquot Business Woman of the Year

Still on the subject of communication, Foulston reveals that she is no great fan of the growing trend among law firms to allow staff, including partners and other fee-earners, to work from home on a regular basis. ‘I readily accept the advantages of people being well-rested. And I recognise that avoiding the commute and getting home early improve one’s quality of life. But it can have a detrimental effect on performance.

‘If, as I do, you accept that communications are the key to a successful business, then communication in person is paramount. You won’t get a successful outcome in any industry unless you bring the team together to develop team spirit, bounce ideas off one another and learn from one another.

‘In my private equity work, I’ve seen considerable mistakes made when people are allowed to work from home. They can lose control of parts of their business and that’s unacceptable. The guiding principle of business is to make money and you must do nothing to compromise that principle.’

Her father made his fortune through computers, giving him the wherewithal to buy Brands Hatch. Does she share his passion for computers and how does she see their role in the modern world of legal services? ‘I’m not a “techy”,’ she replies.

‘Economics and maths were my principal subjects when I was a student. But I love what computers can do and think we can use them better. This firm is already highly computerised, as you would expect from a modern operation like Rosenblatt. The only danger is that clients might not know how the process works to their advantage. It’s up to us to communicate that to them.’

The Gazette steers the interview back to Foulston’s assertion that she has been likened to an alpha male. Do women have to assume male characteristics to succeed in business? ‘I’ve never experienced a gender barrier,’ she replies, ‘except for day one at Brands Hatch when it was generally accepted that a mere woman couldn’t possibly run a motor-racing track.’

She adds that Brands Hatch back in the mid-1980s was a very different proposition from a modern City law firm. ‘It was run in an amateur fashion by blazer-and-cravat motoring enthusiasts who had no understanding or interest in business,’ she divulged in a 1995 interview for the Independent. ‘Deals (were) done on the hoof, calculations done on the back of cigarette packets and favours done for old pals. The headquarters were in a portable cabin, everyone wore jeans, there were no computers and little financial reporting.’ She tells the Gazette: ‘It was time to take the business to a different level.’

She continues that although she mostly escaped sex discrimination, she encountered age discrimination when she was younger. ‘It was to be expected, I suppose, but that’s all finished now – I’m the same age as my then critics. But the genetic make-up of women, I believe, is to be more collegiate and less aggressive than men. In a City context, problem-solving women are the perfect counterpoint to alpha males.’

In the same 1995 interview with the Independent she went a step further: ‘I believe that (in the boardroom) women are better able to marshal their thoughts than men and, because they are less egotistical, they make fewer assumptions.’

Drawing the interview to a close, Foulston says: ‘I have been given a wide mandate at Rosenblatt to get on with the role, which is typical of Ian, but not typical of all leaders who founded their own firm and have run it from day one. It’s not easy to let go. That said, Ian and I have a meeting every single day to discuss what’s going on within the firm, what’s been achieved and our immediate objectives.’