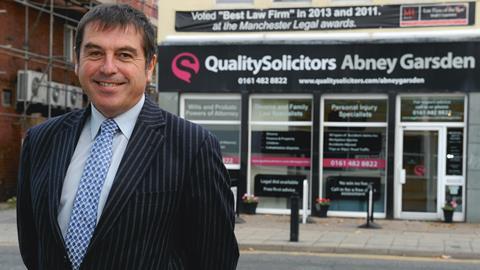 Peter Garsden’s pioneering child abuse cases have been the fight of his life, the Law Society private practice lawyer of the year tells Jonathan Rayner.

‘But I still think it’s the best job in the world,’ he adds. His comment piques the curiosity at several levels. Why would the winner of this year’s Law Society excellence award for private practice call himself the ‘grandfather of child abuse’? And how could anything associated with child abuse, with its long-term emotional scarring of defenceless youngsters, be described as the best job in the world?

Garsden began his first claim in 1994 on behalf of an adult who, decades earlier, had suffered sexual abuse at the hands of staff at a children’s home in Manchester. That first case escalated until it involved more than 800 claimants. It lasted almost 15 years and culminated in £5m damages for the victims. It also prompted Garsden to set up a child abuse department in his sole practitioner firm Abney Garsden, which today is the longest established and largest such department in the country.

‘My first abuse claimant was one of my criminal defence clients who had been referred to me by the police,’ Garsden says. ‘It was very harrowing. I had a hard-as-nails grown man with a string of convictions against his name sitting in my office and sobbing uncontrollably. In those early days, I didn’t know how to deal with it. And I was shocked. I hadn’t appreciated that child abuse was rife in children’s homes. It was the first of hundreds of cases spanning hundreds of children’s homes across north-west England.’

The subsequent years ‘tested every sinew of my legal body,’ he says. ‘A handful of other lawyers and I found ourselves plotting how to deal with such cases from the bottom up.

‘There were no precedents to rely upon, no literature on the subject, no acknowledged experts in the field. The abuse happened years ago, and so there was the question of limitation. Some witnesses were dead, as were some of the perpetrators, and documents had been destroyed. We had no experience of group actions. And anyway, in those days you couldn’t sue individual abusers, but had to prove systemic neglect. We had to write the rules as we went along – psychology, law, practice and procedure. Even counsel told me I had no hope in hell of succeeding.’

Counsel was proved wrong. Garsden and the other lawyers persevered, in the meantime establishing the Association of Child Abuse Lawyers (ACAL) in late 1997, and honing their legal skills in this area until justice was done. Garsden has now acted for more than 1,000 claimants in more than 25 group actions. He has been widely featured in the media and has contributed to a number of child abuse law books. But above all, he was a genuine pioneer in the field and is worthy of that accolade ‘grandfather of child abuse’.

The interview moves on to dinner parties struck down in their prime. ‘People ask me what I do,’ Garsden explains, ‘and when I explain, sometimes the table goes quiet. You see a person looking down at his or her plate, unable to meet your gaze, eyes filling with tears. They are victims, too, you realise. And why shouldn’t they be? One in four of us are victims of abuse, research suggests.’

Is Garsden never reticent about his line of work? ‘I’ve tried saying that I’m a personal injury lawyer,’ he replies, ‘which is true because my clients are injured psychologically or emotionally. But all too often I’m attacked as an ambulance chaser. I then tell them the truth and they are embarrassed. Fantastic, they say, I couldn’t do that for a living. Well done.’

Dealing with emotionally damaged victims must take its toll. Why does Garsden call it the world’s best job? ‘This line of work is more of a calling than a profession,’ he reflects. ‘It is what idealistic law students dream of qualifying to become. You need passion, legal skill and the tenacity to win at all costs. The legal cards are stacked against you, but with hard work, determination and enthusiasm you can win the day. You have the moral high ground on your side, but you still need something beyond the legal facts of the case. You need dedication, passion, a fighting spirit, the right psychological skills – and also the mental resilience to keep going.’

Garsden says that 1998, a few years into his first child abuse case, was ‘nearly the end of me’. He had become obsessive about the case, arriving at work around five or six o’clock each morning and taking work home in the evening. ‘I was overworking, neglecting my family and was stressed out,’ he says. ‘The firm didn’t have the resources or income, and so I was doing it all myself. Worst of all, I split from my wife and daughters for six months.’

The situation reached crisis point while he was giving a presentation in the House of Commons. ‘I found myself choking up. The distinction between being a lawyer and a counsellor had become blurred. I needed to remind myself that I was first and foremost a lawyer. I had some counselling, adapted my behaviour and the crisis passed.’

Some of this counselling came from Lee Moore, one of the founding members of ACAL and a non-practising barrister who is herself a survivor of child abuse. She lectured ACAL members on client care and self-care, Garsden says, and taught them how not to inflict a secondary trauma on victims because of the emotional rawness that talking about it exposed.

Garsden adds: ‘To avoid triggering yet more suffering, we were taught to deal with victims empathetically rather than sympathetically [by which is meant they learned to feel with people and share their pain, rather than merely feeling sorry for them]. This is the right approach because, for the victims, being believed is all important. In the past, nobody’s believed them, which led to low self-esteem and a sense that the abuse was somehow their fault.

KNOWN FOR Pioneer, acting for the victims of child abuse, 2015 winner of the Law Society legal excellence award for private practice solicitor of the year.

Pastoral care apart, ACAL provides training for its members through lectures, webinars and one-to-one mentoring. It also – crucially – maintains a database of cases with which members are currently or have previously been involved. ‘It makes sense that if a certain children’s home comes to the attention of a lawyer, he or she should be able to find out whether the same home is on other lawyers’ radar screens. If it is, then those lawyers are an obvious source of corroborative evidence and, potentially, are prospective partners in a class action.’

Much has been made of the police appealing for victims to come forward in the wake of accusations against celebrities. What prompts Garsden’s victims to put their heads above the parapet of anonymity? He says: ‘When the trauma happens, the victims are children and unable to run off to lawyers for help. When they are around 30 to 50 years old, however, things are different. They have spent many years in painful silence, but something in their lives acts as a trigger. It could be their child reaches the same age that they were when they were abused. Or it could be the death of a parent who they had been trying to protect from the truth. Or it could be, as in the case of Savile, media coverage giving them the courage to come out.’

‘My job,’ says Garsden, ‘is to get compensation for the victims, but their driving desire is for justice and being believed. They want to stand up in court, tell the judge what happened to them and be believed at last – because in the past their complaints have been dismissed. Of course, they also want to see their abusers prosecuted and punished for the lifetime’s damage they have inflicted upon them.’

The Gazette comments that many victims had a disastrously poor start in life, being removed from their own dysfunctional families into an environment where abuse was practised with impunity. They may drift into crime and substance abuse, while a high proportion, compared with the rest of the population, commit suicide. Few of them can hold down good jobs. How do they fund their actions against their abusers given that legal aid is an endangered species?

‘We campaign and argue to retain legal aid for victims of abuse,’ replies Garsden, ‘but we act in a climate of tension rather than collaboration. The government should be helping us win these cases and put a stop to future abuse, not making us work on a shoestring and put our firms and families in jeopardy. The process is fraught and informed by politics. There is so little public money around that legal aid inevitably comes under scrutiny. But haven’t these victims suffered enough already? Isn’t it time they were shown some humanity?’

The Gazette asks whether it is humanity that prompted Garsden and his wife to become foster parents to 18 children over the last seven years. ‘Fostering is more real than all my work as an abuse lawyer,’ he answers. It counts for more than all the awards I have won. It is doing something that is difficult and trying, but makes a difference. They don’t normally thank you, at least not until they are older and maybe have children of their own. Then they sometimes begin to recognise what you have done for them. But we don’t do it just for the thanks.’

Garsden is 58 years old. The walls of his firm’s reception area are buckling under the weight of framed citations: in 2013 alone, he won four solicitor of the year awards and one small firm of the year award. And this year, of course, he won the Law Society excellence award for solicitor of the year in private practice. What few leisure hours he has are crammed with amateur dramatics, sand yachting, water and snow skiing, going to the gym, and flying model aeroplanes. He also has a wife, two daughters and foster children. Isn’t it time to say goodbye tension, hello pension?

‘Retire?’ he says, shaking his head. ‘I’ve still got far too many campaigns to complete.’