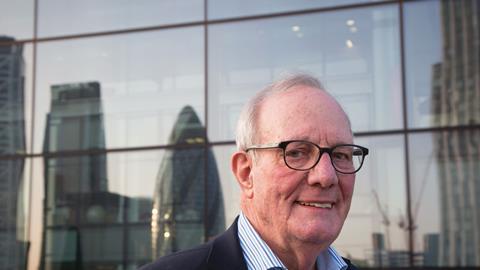 Philip Wood CBE, QC (Hon) has penned a pop song with ‘risqué lyrics’ that is to be released in June. He is also, as it happens, a top-flight international lawyer, a don at the universities of Oxford, Cambridge and London, and the author of 19 books.

Wood was brought up where a child’s life depended more on avoiding crocodiles than dodging cars. He has travelled the globe, most recently completing a lecture tour ‘from Addis Ababa to Cape Town’. He ran the Paris marathon aged 72. And he is currently leading a comparative law project involving students from the world’s top universities.

To describe Wood as versatile and tireless is to understate the case. Of his many books the latest, The Fall of the Priests and the Rise of the Lawyers (published by Hart in April), is for the general reader. It portrays a powerful vision of the role of law in the 21st century and how it is key to our survival as a species.

The word ‘survival’ peppers the interview. The case that persuaded him to enter the legal profession, he tells me, was R v Dudley and Stephens (1884), where the defendants – drifting in mid-ocean without water or food – ensured their own survival by killing and eating the cabin boy.

They were convicted of murder back in England and sentenced to hang, only to be pardoned by Queen Victoria. The issue was one of a ‘moral survival code’, Wood observes. Can it be right to go against the law and kill one person so that others survive? Or would such an action risk unleashing the ‘blind charioteer’ – the force of anarchy in a world without the rule of law – who will end humankind’s time on this planet?

‘We have law in order to survive,’ he states. ‘We have a duty to survive to discover if there is ultimate meaning [to our lives], to answer the big questions, to ensure our permanent survival if we can… This duty is an obligation owed to future unborn generations.’ And who is better qualified to interpret the law than lawyers?

Where did Wood’s story begin? He was born in the former British protectorate of Northern Rhodesia – now Zambia – in the town of Livingstone. Wood’s father was a lawyer there, at a firm that was ‘one of the largest in the region outside Johannesburg’. The town lies close to Victoria Falls, where the Zambezi, at that point more than a mile wide, plunges 355 feet. Spray is hurled into the air and is visible from miles away, and the noise numbs the ears. It is small wonder that local people still call the falls ‘the smoke that thunders’.

‘I loved Africa,’ Wood says. ‘You didn’t need to learn to avoid cars, just not to step on a crocodile thinking it was a stone.’ He moved on to the University of Cape Town, where he read English literature, and then to the University of Oxford for an MA, also in English literature. After the College of Law in London, he joined Allen & Overy (A&O) in 1967 as a trainee solicitor, qualifying in 1970 and becoming a partner in 1973.

Why the switch from English literature to the law? Wood replies: ‘I never found deep truths in literature. My intellectual curiosity was not satisfied by poetry or great plays. The [creative] medium is not the best way to communicate information and data. The writer’s need for self-expression and the fact he is writing fiction distorts the message. It is a limitation. With the law, on the other hand, you are free to amplify and simplify things. It is one of the reasons I wrote The fall of the priests.’

Does he miss Africa? ‘A sense of identity is very reassuring, but tribalism is good for football supporters, not for the big things in life,’ Wood replies. ‘I feel no identity with Africa or with the Yorkshire that my parents loved so much. I’m an alien everywhere, but also a true citizen everywhere. Nobody at A&O articulates this, but that’s our ideology – we are a one-world firm.’

Rising quickly in the law, Wood learned on the job: ‘It was different back in 1967 when I joined A&O. You did everything, big and small. When the Eurobond [an international bond, first issued in 1963, which is denominated in a currency not native to the country where it is issued] opened up and became acceptable for general use as a means of raising capital, I did the bonds for the 1976 Montreal Olympic games.

‘Things evolved. There are around 320 jurisdictions in the world and the number is still climbing. You could have, say, 100 different countries involved in a particular transaction. I was able to develop a method of unravelling the national laws so that the transaction is completed in a timely and economic manner.’

Wood went on to become head of A&O’s banking department from 1992 to 2002, whereupon he retired and became a consultant. ‘But retirement was not for me,’ he says. He rejoined the firm in 2008, this time as special global counsel and head of A&O’s Global Law Intelligence Unit (GLIU). He is still there.

The GLIU is a thinktank of a dozen A&O international lawyers from offices all over the world. ‘We publish views on all sorts of arcane areas of international law, such as sovereign swaps, the Argentina pari passu case and the status of Ukraine’s national bonds. We draw on the capability of the firm’s 2,500 lawyers, one of the largest and most potent assemblies of lawyers the world has ever seen. I’m surprised more law firms don’t have similar units. Banks have their economics units and McKinsey has its global institute.’

Wood continues: ‘At A&O, we rely upon partners to send out the unit’s papers to their clients. Provided you don’t send out too many, clients often find them interesting and useful. We try not to be too scholarly, we use the vernacular, hardly ever mention specific cases, include a bit of history, make the occasional joke and altogether try to be quite un-lawyer-like.

‘Importantly, we also provide a useful outlet for unpalatable truths. It’s hard for lawyers to express views that might upset their clients. But if it’s me saying something about Brexit, for example, and the client doesn’t like it, the partner can dismiss it by saying it’s only Philip Wood. He’s an academic and prone to opinions which we don’t necessarily agree with.’

The GLIU is presently carrying out a world universities comparative law project, which is researching and publishing the legal rating of 60 participating countries, with another 50 countries in the pipeline. ‘It is not a law book, but a study of how you measure a legal system. Students from the law faculty of each country’s top university are invited to complete a survey of how the legal system works in their country.’

Wood continues: ‘It’s a wonderful opportunity. The students are encouraged to discuss law at an early stage of their careers and are put in touch with elite law firms in their own country. In the case of Cairo University, during a time of great turmoil and revolution, it allowed the students to assert that they are part of the world community and could still talk to other students.’

KNOWN FOR: Authorship of 19 books, mostly on international finance; one of the world’s leading experts on comparative and cross-border financial law

The interview returns to Wood’s most recent book, whose premise is that ‘for societies to survive and prosper they need the rule of law, which is the one ideology that everyone – except anarchists – believes in.

‘Our laws used to be dictated by a supernatural being, a god, and interpreted for us by priests – think the Ten Commandments. Many of those precepts, such as not murdering anyone, remain respected. But as societies became more secular, the priests retired into the shadows and our laws were increasingly devised by humans and interpreted and administered by lawyers.’

Wood argues that a society can function without a philosophy of life or religion, but that no society can survive without law that is fit for purpose and embraces everything from traffic lights keeping the streets safe to the price of bananas. ‘Everything done in law is directed towards survival,’ he insists. For instance, he adds, nobody would store and sell bananas unless they were confident that they could turn a profit and that anyone stealing them would face the full weight of the law.

Wood continues: ‘I write that the rule of law delivers freedom and enhances our potential to control our destinies. If the law chains us, it does so in order to liberate us. Economics supports that argument.

The highest GDP per capita is achieved by states where the rule of law holds sway.

‘The law develops almost like science, each bit debated at length until it becomes part of the law. That law comprises a prodigious multitude of tiny efforts, pushing the tide up the beach and over the first sand dune and then the next sand dune and so on. No individual act is big, but put together it makes for a massive whole.’

The interview would be incomplete without further mention of the pop song penned by this self-confessed ‘fusty old bloke’. ‘It’s called The Face,’ Wood says. ‘It’s retro-rock, with eight beats to the bar and lyrics that, while cheeky and risqué, are not exactly profound poetry.’

The song will be debuted on 8 June at Central Hall, Westminster at a musical gala presented by Legal Harmony and City Music Services. Opera singer, actress and TV personality Lesley Garrett is star of the show.

From colonial outpost to magic circle City firm, Wood’s high-achieving life has encompassed legal practice, academe and prolific authorship. All that’s left, it seems, is the rock’n’roll hall of fame.